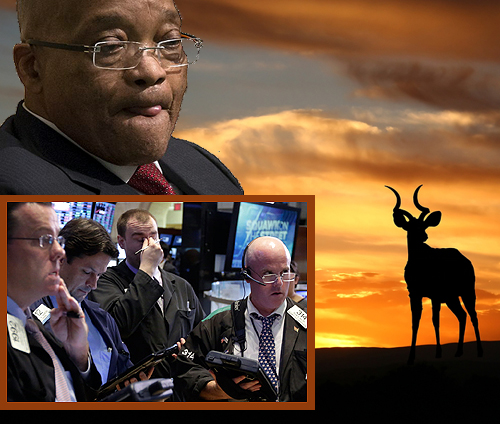 For years I’ve resisted thinking of South Africa as a banana republic, but what happened yesterday is a slap to my reasonable face and what might be the beginning of an irreversible banana republic mentality.

If you don’t follow South Africa, you wouldn’t understand that President Jacob Zuma’s unannounced firing of Nhlanhla Nene as Finance Minister is what I’m talking about.

Nene had resisted financing some of the most egregious of Zuma’s escapades, including a nuclear power deal that Zuma is personally invested in and lavish plans by an incompetent CEO of South African Airways who Zuma appointed that he himself suggests is his mistress.

The country’s most widely read online newspaper held no punches:

“[This is] an act of willful sabotage, an act that will have catastrophic effects for everyone…. It is the act of a leader who despises those he leads, a leader who has no respect for his office, a leader who is there to serve a closed network of friends, advisors, backers and loyalists. It is an act that resembles a Hollywood terrorist plot …so close to treason that it becomes difficult to give it another name.”

Only the much more conservative Financial Mail urges calm:

“SA could tolerate 10-20 years of mounting debt or expansive social spending before reaching the cliff.” South African government spending is currently at 45% of GDP. Real banana republics often flirt with 70%.

The heart of the problem, though, is what that debt is being used for:

Zuma’s antics as the leader of Africa’s most powerful economy are legend, and I’ve written often about them. The pitiful nature about them is that he doesn’t even try to deny them, often revels in them:

He’s built himself mansions with public funds, flouted official global functions with various wives and mistresses, publicly laced his family’s coffers with uninhibited nepotistic appointments and most lately, pushed South African Airways to buy many more new aircraft than they need and pushed for the expensive government financing of nuclear power.

But I’ve ended every bad account of Zuma’s corruption with reminders that this is still an early republic, still led by those from the core of revolutionaries who pulled off independence. Unusual latitude in public discretion might be acceptable.

But I don’t know, anymore. Zuma takes the cake.

The South African constitution guarantees the integrity of ministerial offices like many parliamentary democracies. Once appointed, Nene ran the treasury with skill and national pride rebuffing Zuma’s petty schemes.

Many thought he was bringing Zuma round to his senses.

But the power of appointment is also the power to fire, and that’s what happened unexpectedly yesterday.

“For Zuma, it is another accomplishment in his mission to completely capture the state and will ensure unwavering loyalty from those who serve at his pleasure. There will be no defiance in cabinet ever again,” one of the country’s top commentators explains.

“The news broke late at night,” the country’s Mail & Guardian reported. “But instead of [just] shrugging their shoulders, South Africans raged. Something [has] snapped in the nation’s patience.”

Social media is alive with outrage. Close ANC advisories and relatives of those in power are vocal in criticism for the first time.

Public opinion has never tempered Zuma’s foolishness, so I doubt it will now.