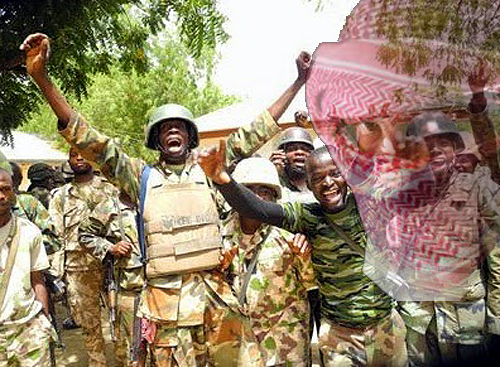 Nigerian forces have fallen into a jihadist trap as they wipe out Boko Haram.

The change of presidents in Nigeria last year heralded a major offensive against the jihadists that once controlled nearly a third of the country. The army was finally paid and reconstituted by the new Nigerian president Buharu who was previously a decorated Army general.

In Nigeria, like in Syria with Russian forces, jihadists began falling like straws. In Iraq ISIS, too, has been in retreat following increased coalition attacks.

So what’s the problem?

Non-jihadist Muslim Nigerians warned Buharu yesterday “against plunging the country into another Boko Haram-like insurgency.” Read carefully: “another” – ‘ a different.‘

Terrorists are terrorists because they don’t have battleships and long-range bombers. They are guerrillas who master weapons of small but notorious destruction. The success of their killings is not evident across fields of slaughter, but on millions of tiny television screens. Geographical control is no longer as important as mind control.

The Nigerian sweep against Boko Haram has been impressive and fast. Hundreds of hostages have been freed after months, almost all of the country has been liberated from the terrorists’ control.

That’s good. Cheers to the Nigerian Army! But they didn’t stop. Fed by the propaganda of the bits of Boko Haram that remain, their fears were stoked and they charged on.

They ransacked homes of these Muslim leaders, detained others, laid to waste several Muslim facilities and in the course of this “over-reaction” provoked a number of Muslim (but non-jihadist) leaders to vow revenge.

This is exactly what the terrorists want: they will die happily knowing that others will replace them.

As a real corollary here in the U.S., individuals attacking mosques and presidential candidates claiming they will somehow effect policy against virtually all Muslims… this breeds new terrorism.

Nigeria is the petri dish right now for this theory.

Personally, I fear President Buharu has already gone too far. He’s a ruthless soldier. Not exactly a Donald Trump, he nonetheless swept to power in a wave of nationalist sentiment of “no-holds barred” against the terrorists.

He delivered on his promise, but then he didn’t stop. In a sense it’s not entirely reflective of any over intentions, it’s just that terrorists are the chimera of world conflict. One moment they’re al-Qaeda, and the next, ISIS. Hack one down, and another arises.

Nigeria must stop now and read history: As Russia and the U.S. learned decades ago, you never wipe out terrorists, whether that be in Vietnam or Afghanistan. You simply clean the surface of old terrorists so that new ones can grow.

This requires a certain military restraint by the aggrieved societies of the sort I worry Nigeria cannot develop so long as Buharu is at the helm.