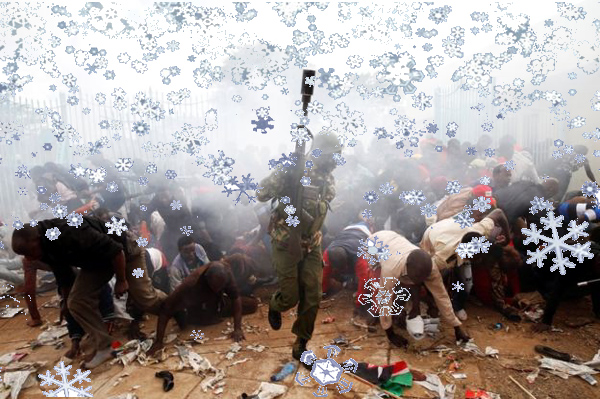 Winter’s coming: Fatigue in the blood-shot eyes of the activist. The man who couldn’t stop jumping for joy when Mugabe resigned. Grandma endlessly flapping her flag after the court annulled Kenya’s election.

Shortly after the preeminent biologist E.O. Wilson received the Thoreau Prize in early 2011, I went into Chicago to listen to him give a lecture at the Newberry Library. Everyone expected him to talk about ants. He talked about tribes.

Wilson applied his theory of tribalism to America’s political polarization.

Yesterday Uhuru Kenyatta was sworn in for his second term as president of Kenya.

“We may have chosen different candidates and different visions, but each one of us voted for a better life,” he told cheering supporters packed into the national stadium while according to the BBC “there were scenes of chaos outside when people without seats tried to rush in and were driven back by police with tear gas and batons.”

The third largest city in Kenya is on lock-down, with almost as many police and soldiers in the streets as citizens. In Nairobi city there is jubilation and daily life seems almost uneffected. In Nairobi’s sprawling slums where tribes are thrown together pell-mell, smoke still rises.

Kenyatta has created an effective lid on dissent. As winter falls the violent protests will settle into discontent. Kenyatta may indeed work for the betterment of all Kenyan citizens, but his record is clear:

He will consolidate his power over Kenya by mustering the forces of his own tribe. The ripest fruit will go to the Kikuyu in government, business and education. If Kenya continues to prosper and Uhuru turns out to be as benevolent as his father was, other tribes will also profit from unexpected riches, but they will never become as rich as the Kikuyu.

That’s tribalism plain and simple. It has governed Africa’s development over my entire lifetime. Indications it was crumbling in the last several decades now seem premature. The young Africans who so vocally denounced tribalism are now its central players.

When the largest tribe is in control, as in Kenya, democracy is about the best tool in the arsenal to reenforce it. Kenyatta was freely and fairly elected, twice in fact. People power is on the side of the largest tribe. After the minority is beaten into resignation, we could see in Kenya a very long period of peace and prosperity.

Rather, peace and prosperity is jeopardized when power shifts from the majority to the minority and vice versa. The more frequent the shifts, the more brutal the outcomes.

That’s the situation, for example, in Rwanda and Ethiopia today. Catastrophic discrimination and brutal repression led to a never-ending series of genocidal retributions. The last time round in those power switches, the international community got deeply involved and decided to prop up the minority tribe. The west props up the Watutsi in Rwanda and China props up the Trigrayan in Ethiopia.

Both minority tribes suffered horribly in the past, precisely because they managed at various times to come to power infuriating the majority tribe who then massacred them. Were it not for international influence, both governmental and economic, it would be happening again, now. But the international community concluded that keeping the minority tribe in power is about the only way to save them from being massacred, again.

A brutal police state and authoritarian rule is all that can keep the peace in such places. The international patrons insist on certain levels of stability and civility, so things aren’t so terribly bad unless you want to speak your mind. Democracy in this case is a certain way to reverse power.

And when it does, guess what? If democracy were to prevail and Hutus regained power in Rwanda, they would massacre the Tutsis who have oppressed them for so long. The cycle of retribution is endless. Turkey and Armenia, Bosnia and Serbia, Jews and Arabs, Catholics and Protestants … it’s never ending so long as human beings adopt those tribal monikers to identify themselves.

Tribalism is the most primitive, the simplest form of division. When you’re exhausted and depressed, this is what you retract to, what you still take ownership of: your tribe.

Democracy isn’t the solution. There is no political solution. What everyone needs is the courage to think about themselves differently. In America we’re at a crossroads. If we continue to think of ourselves as Republicans or Democrats, or the more intellectual Conservatives and Progressives, we’re going to stifle all progress and simply laager down for war.

In Africa it’s a matter of birth, and that’s a difficult one to abandon. In America it’s conceptual. It should be easier for us. Beware the winter.