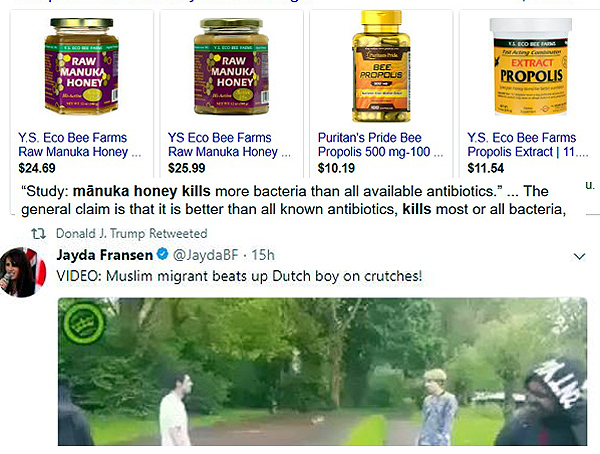 On Saturday, September 30, Kathleen and I drove our black Jeep Grand Cherokee from Taos west on highway 64 through Dulce, New Mexico, past a facility that aliens had built under the ground to conquer the world. With a prolonged drought depressing South African honey production, the government has removed restrictions on the importation of mānuka honey, which purports to better many antibiotics and is natural.

The first item of fake news is amusing and mostly benign. The second item of fake news can kill South Africans. Like zero tolerance for sexual harassment the cultural revolution needs to debunk one just as ferociously as it debunks the other.

I won’t spend much time debunking the alien facility Kathleen and I allegedly drove past. But do spend a minute looking at the sentence. True: Saturday. True: September 30. True: it was a black Jeep Grand Cherokee. We truly did drive through Dulce, New Mexico, and so proponents of fake news often defend their positions with the claim that “there are true and false parts” to almost every statement.

The point is that a bunch of little truths don’t make a statement less false.

There are few scientific tests on the efficacy of mānuka honey, but prominent websites like WebMD aren’t really explaining that:

“..the evidence is limited on whether or not mānuka honey is effective for” and WebMD then lists a whole range of ‘possibly’ treatable ailments like cancer, high cholesterol, inflammations, diabetes and more.

There is, in fact, one scientific study and a whole lot of independent studies. The unscientific studies claim that the honey is in some few cases antibacterial.

In a recently emerging society like South Africa which clings to herbalist and other natural health care legacies this very limited affirmation supported by the qualifying remarks of sites like WebMD means the product will sell like hotcakes.

The bits of truth about the honey should not stop a South African with a sinus infection from going to the doctor, but it does because we’ve been unable to clearly draw the line between fake news and possible news.

A respected columnist in South Africa has taken on the honey with a full press critique in an attempt to stave a disaster. Ivo Vegter traced most support for the honey’s exemplary powers to a widely read global online magazine called Natural News.

“Study: Manuka honey kills more bacteria than all available antibiotics” reads the headline published around the time that South Africa removed import restrictions on the honey, which is produced in Australia and New Zealand.

Vegter painstakingly refers to multiple other studies debunking the claim. He found only one “randomised, double-blind, placebo-controlled clinical trial” that concluded the honey did nothing: It didn’t do what it says it does. But Vegter is careful. One study does not a truth make, either.

He concludes that “Australians and New Zealanders are just better at marketing” and suggests until more real studies are undertaken, you still better go to your doctor with a sinus infection.

Fake news kills. And the battle to define fake news has reached the highest echelons of power, with Donald Trump purporting truths that Britain and Holland aggressively dispute.

There is real urgency to this. I understand the urgency of zero tolerance for sexual harassment but what about the folks in South Africa self-treating an infection that might become a public health disaster?

Or when he nukes North Korea and calls it a Bali volcano, or at least makes himself believe it, or at least thinks his base can be so convinced?