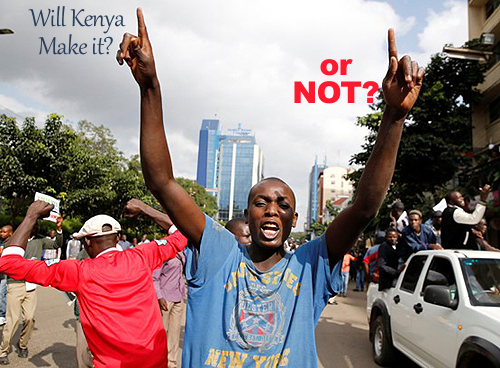 Kenya did better yesterday. Three people were killed in demonstrations near Lake Victoria. There was teargas in Nairobi; part of the city closed down in the afternoon, but the police in Nairobi seemed more restrained.

Kenya’s problem is tribalism. Forget about all the momentary issues (the current is over legitimacy of the IEBC). Get to the core: the battle between the Kikuyu and Luo.

Tribalism doesn’t lend itself to modern social engineering. It’s ingrained and stubborn, like a bad habit. It’s not easy to shake.

Yet more than any other African country in history, Kenya has the potential to resolve this incredibly difficult problem.

Kenya is the one country in the large quarter of the continent known as eastern equatorial Africa that is most advanced: most educated, most worldly and most integrated into the world community.

If “Kenya can do it,” then maybe Tanzania and Uganda can, too. If Kenya can’t do it, then a lot of us are going become terribly pessimistic about eastern Africa.

Kenya stands with only two other countries in sub-Saharan Africa, Nigeria and South Africa, where social and political conditions are similar.

It’s probably the most junior member of those three countries, and that’s the reason right now democracy is so violent. Remember that Nigeria was an extremely violent place starting with the civil war in Biafra, and the anti-apartheid struggle in South Africa was far more violent than outsiders remember.

The question for Kenya is whether it will emerge from this period as Nigeria and South Africa did from theirs, more democratic and free.

(Please don’t exaggerate me: the problems in Nigeria are enormous and South Africa is currently flirting with ascension into a fantasy world, but by the measures of sub-Saharan Africa, they are both solidly democratic and stable.)

Rwanda went through the most catastrophic trial ever in this regards in 1994. A millennia of bitter rivalry between Hutu and Watutsi turned into genocide.

Rwanda came out squeaky clean, a horribly totalitarian state where you really can leave your car doors unlocked on the streets of the capital, but you dare not even whisper a criticism of the president. In cases like this, only one tribe can enforce peace. The Watutsis rule. The Hutus live peaceably.

It’s hard to criticize Rwandans for this after what they went through, but it really could have been different: Nigeria – at least its eastern parts – had just as awful a history as Rwanda, but they didn’t choose the level of authoritarian rule that exists today in Rwanda. They don’t imprison every journalist, politician or blogger who dares express an opposite point of view.

Freedom is unequivocal. By its very nature it allows violence; some would argue it foments violence. It’s a terrible trade-off that we who live in more mature societies don’t have to live with: our predecessors did that.

So we sound rather solicitous when we tell others to suffer the moment for a better future.

None of us want the Rwandan solution for Kenya, yet that is exactly the potential direction if the current period through next year’s elections doesn’t work itself out in a peaceful way.

Read the thousands of comments on the Facebook edition of my blogs and you’ll see the incredible rancor and hate of tribalism in Kenya. You’ll understand what an enormous task is presented Kenya.

Kikuyu vs Luo. What’s so interesting is that it once was Kikuyu vs. Kalenjin, but in a masterful political move last election, the Kikuyu and Kalenjin formed a coalition to defeat … the Luo.