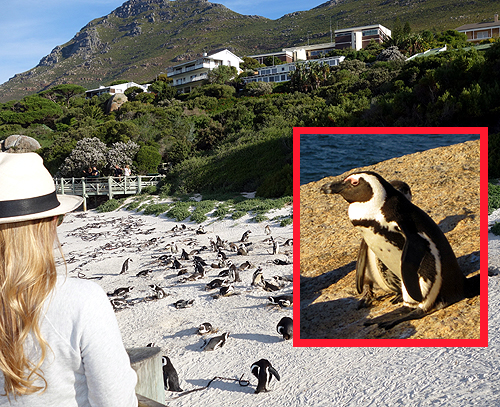 Human/wildlife conflict isn’t limited to dangerously powerful elephants walking over an impoverished Tanzanian farmer’s watermelon field. Several days ago in a thoroughly modern city in The Cape one of the world’s most endangered animals suffered a serious blow from … car traffic.

There are few animals in the world as endangered as the African Penguin (Spheniscus demersus), sometimes called the Jackass penguin.  Just over 25,000 breeding pairs remain of a sustainable population of 1.2 million birds that existed only a half century ago.

This is a far greater catastrophic decline than that of elephants or lions, and it shows no sign of abating.

Moreover, the animal is a bellwether species for a whole host of marine creatures that depend upon the Benguela current, which of course is heavily impacted by climate change. The penguin’s survival falls tenuously between its food source of anchovies and sardines and its predators of seals, sharks and killer whales.

So goes the African penguin, so goes much of the sea.

In busy Simons Town last week, where like everywhere it seems road construction is unending, two vehicles crashed while trying to avoid penguins crossing the road. Nobody was hurt. The cars are reparable but two penguins were killed and at least one other injured.

Simons Town is a coastal city just at the north end of The Cape of Good Hope on the eastern side. Its deep water entry is the reason it’s also a South African naval port, which is also the reason it’s perfect as a breeding area for these birds.

The African Penguin spends most of its life at sea feeding in deep ocean waters, coming ashore only to breed and molt.

Simons Town has developed into a tourist city over the last half century or so, with a single main street lined with shops, restaurants and BnB’s. Many retired people buy and build homes near the sea or slightly up the steep slope of the quickly ascending inland.

The city authorities have tried time and again to fence the area where penguins breed to keep human/bird conflict to a minimum. The South African National Parks actually took authority over the city’s main breeding area and has fenced that in, and Boulders National Park is one of the most visited and well-run little wildernesses on earth.

But animals, including birds, are clever and fences aren’t guaranteed to work, especially since the penguins come ashore wherever they like.

City authorities recently put to tender a new penguin fence to replace part of one recently lost in a fire. The bird upright waddles at a height of about 2½ feet full grown, but its burrowing skills for nesting are highly developed.

A December 2015 article in South Africa’s Daily Mail reported “more than 40 birds [penguins] were killed by pets” in Simons Town that year. The authorities reacted by increasing police patrols near the beaches and by passing a leash-law for dogs.

But read some of the comments left after that December, 2015, article and you can feel the frustration of many local residents with the penguins.

Add rapid climate change and must we ask, “Who comes first, people or penguins?”

The oversimplified question ignores the reality the two are inextricably linked and begs the debate over the interconnectivity of the entire planet’s ecologies.