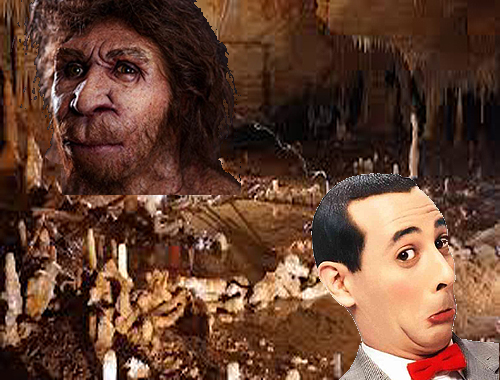 When the first great human civilizations developed in Africa 200,000 years ago, Neanderthals were also socializing in Europe.

Neanderthals were anatomically distinct from humans, even more than Yao Ming and Jimmy Durante.

They were bigger, not necessarily taller, more robust and likely much more muscular. Their face was much different with a protruding nose and receding chin and forehead. The best explanation for these differences is that they were adaptations to a much colder environment than in Africa where we humans evolved.

But they also had a larger brain, although this remains contentious among some scientists who argue that brain size alone is meaningless and that for comparative purposes needs to be taken in the context of the creature’s overall weight. Even this data of ratio is muddled, but I’ve always felt that skeptics in this area were humanogynists, persons biased against Neanderthals simply because they weren’t us.

But the two creatures have a remarkable amount in common. They are, after all, the last creatures to survive the great hominin experiment that began 6-8 million years before and which had birthed a dozen or more separate “man-like” species.

So they both had hands and feet that were similar, they were both entirely bipedal, their teeth suggested similar diets, and they both had very large brains relative to their body size.

And they both used fire and tools, created jewelry and primitive art.

Africa’s climate changed for the worse and the Africans left the continent seeking the greener pastures of Europe. Contact with the Neanderthals finally happened maybe 50,000 years ago, and not long thereafter the Neanderthals disappeared.

The great hominin experiment was over. Only one species remainded.

Why the immigrant prevailed over the native has intrigued us for years, and the popular notion presumed the Neanderthals were the dumb-ass thugs, since obviously, aren’t we the smartest thing that ever showed up?

Presumptions about self taint all social science, and that’s specially been the case with the Neanderthals for a long time. We’re discovering they were anything but dumb-asses.

A French discovery published in Nature this week details a Neanderthal boma 1000′ feet down a cave. Using the stalagmites of the cave the creatures formed a structure remarkably similar to the “bomas” that characterized traditional African nomadic peoples.

On the arid plains of Africa nomads created a circular kraal or homestead usually with thorn trees and other small bushes, primarily to protect livestock from wild animals.

The Neanderthal structure is remarkably similar, although there’s no indication and it seems difficult to suppose that they were protecting livestock.

There was evidence of fire within the Neanderthal boma, just as with more modern African nomads.

Commenting on the discovery, a Leiden University archaeologist Marie Soressi writes that “their discovery indicates that Neanderthals exhibited more complex social behaviour than was previously thought, and suggests that these hominins used the underground environment.”

We never thought to search for Neanderthal meaning … underground. Yet it makes perfect sense in a frigid environment since deep underground warmth can be conserved.

And keep something else in mind. As with all hominins sight is critically important. There is no light underground … unless you make it.

The need to govern our over estimation of ourselves has been a struggle vis-a-vis the Neanderthal since it was first discovered. Even today religious crazies concoct the most amazingly warped analysis to claim the creature didn’t share a similar evolutionary path as ours.

We’re winning that battle, I’m sure. But the battle to not stereotype is a tougher one. We could one day, for example, determine that the Neanderthal was smarter, fairer and … nicer than us!

Because “us” has changed radically since the days of thorn tree bomas, and had some random event not given us the advantage over the Neanderthals, then it might have been we pee-wees showing up in Sunday cartoons, not the “dumb-ass” Neanderthal.