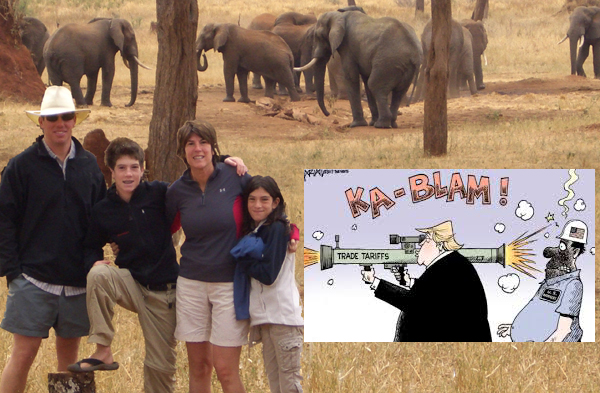 The developing global trade war has already reversed a downwards trend in the price of African vacations and will likely spurn increases.

Unilateral tariffs of the sort imposed by Trump always stifle international trade. When international trade declines leisure travel declines. Sectors with relatively small volumes of business – such as adventure and exotic travel like African safaris – react to these sudden declines with price increases.

Media attention was understandably focused on the large commercial exchanges between Europe, Canada, Mexico and the U.S. implicated in yesterday midnight’s tariff suspension termination. But those same U.S. tariffs were imposed worldwide several months ago, and Africa was never given an extension.

Both South Africa and Nigeria actually export small amounts of steel and aluminum products to the U.S. But it isn’t just direct sales of taxed items. In today’s interconnected world something as simple looking as a cell phone is created by a multitude of products, some of which have been effected by Trump’s tariffs.

The several months of higher tariffs have already slowed international trade. Between the U.S. and most African countries a serious slowdown has begun.

You would think in any downturn prices would decrease. That’s true for large markets like cruise ships and airlines. But for small markets – and adventure and exotic travel is a very, very small market – the reverse occurs.

Investments in adventure travel and exotic properties like a safari lodge are small and usually tightly held. The ROI (return-on-investment) is short, usually three years, reflecting not only the size of the market but the social and political volatility of the region.

When investors anticipate a slow-down or sluggish growth, they raise prices. The theory is that persons already contemplating booking as well as many far forward bookings are less likely to abort even when presented with price increases, than the prospect of even greater reductions in return over the midterm (3-5 years) if prices aren’t increased.

This arcane theory of pricing is further supported by the fact that the most competitive portion of the market, the price competitive lower echelons, do poorest in an economic downturn.

Investors in adventure and exotic travel understand that prices can’t be lowered enough to stimulate low and midmarkets. The upmarket is least likely effected by a downturn and more willing to absorb price increases.

When the economic downturn ends, these short-term investors disappear… but they haven’t lost their shirts. Just their interest in adventure and exotic travel.

It’s the reason we suffer such turnover of ownership in this market.