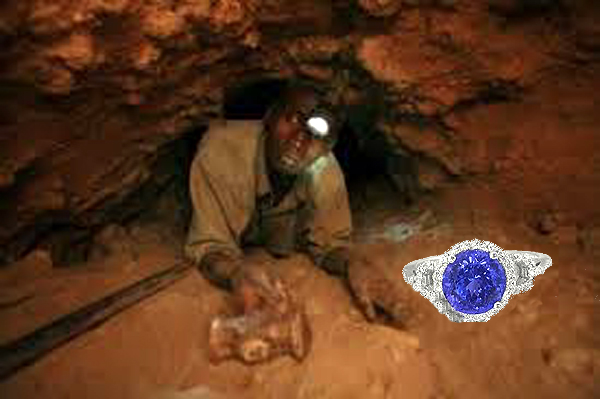 Into deep pits. Fourteen to be precise. Wooden scaffolding goes deep, far below the noon day sun over the hole, raising the temperature in the dark to the mid nineties. Only men are working, some very young.

These are Tanzania’s tanzanite mines. To their credit government regulators visit regularly, weeding away the boys who should be in school and fining owners who provide too little water.

But for years that’s all they did. The main job regulators had was to collect royalties. They were to examine each stone retrieved, estimate its value and assess a tax. For the last 30 year of Tanzanian mining, they’ve collected less than a million dollars from a market now estimated at having exceeded $1 billion.

The government royalty is technically around 16%, not .01%.

What happened to the money? Consider that most of the old regulators have been fired and have left their jobs in luxury cars. But it wasn’t wholesale graft because the price of tanzanite was always ridiculously low, around $250/carat.

That’s changed. Recently the government announced it collected three months of royalties that amounted to more than the last three years’, even while tanzanite production declines.

Various mines stopped any further litigation against the government and announced a uniform policy of regular tax remittances.

President John Magufuli announced he was going to build a wall around the mines and staff it with loyal regulators.

That decision was all the market needed.

In one week in May the wholesale price of tanzanite doubled.

Many of my clients have purchased tanzanite over the years, as have I. The decline in production in the last five years signaled a possible end to new mining, although that has proved a bit premature.

Nevertheless, that and Tanzania’s new successful attempts at collecting its taxes have raised the cost of a decent raw gem from around $400 to $700/carat.

In a country with not too many good stories to report recently, this is.