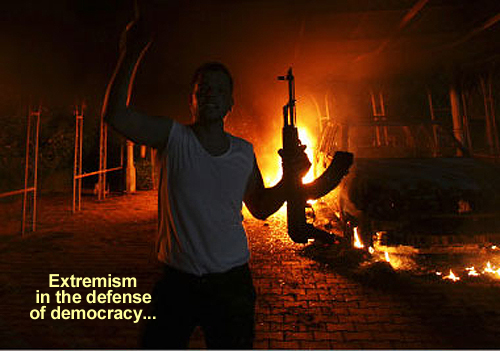 African unrest this week and Tuesday’s attack in Libya are profound indications that democracy is as nuclear as uranium.

The attack of America’s Benghazi consulate was likely coordinated by an al-Qaeda affiliate to mark the 9-11 anniversary. But were the growing protests prior to that just coincidence? Even more eery, was the film by a mysterious American extremist posted on YouTube castigating Mohamed coincidental?

Conspiracy is a nasty game but there are some dangerous fingerprints on that video. The maker has disappeared. New and technologically immature Afghanistan was able to block it from being seen by its population, but vastly more savvy Egypt didn’t.

And much more to the point, how does such symbolism evoke such violence?

The same way white pointed hats in the older South played judge and jury in a single night. Or the way presidential candidates threaten bureaucrats with summary lynching. Or the way Rush Limbaugh raises the blood pressure of 5 million brainwashed Americans every day.

That’s what’s happening with the growing crowds of protestors in the Mideast, now, throngs of desperate people looking for a fight, anything to blame their misery on.

When strongmen held Egypt and Libya at bay, just as strongmen today in Uganda or Zimbabwe, dissent of any kind is eliminated. Yet these dictators are often tolerated by the world and held to some mythical threshold of human rights violations, some trigger line of so much blood spilled.

We forgive without question their mercenary capitalism that allows them to achieve untold wealth at the expense of their poor. But we kick into action when slow death is replaced by quicker, more violent deaths. And perhaps there’s no other way. We can’t be everyone’s brother’s keeper.

But our mistake is the belief we are ourselves immune to such folly. We, too, are fooled. We, too, are impoverished by our elite leaders.

Consider this. The arsenal of weapons including shoulder-fired missile grenades that blew up our Benghazi consulate are available right now for you to buy on eBay, and while the vast majority of the world forbids their ownership by private citizens, you can receive them legally by UPS in Colorado and Texas.