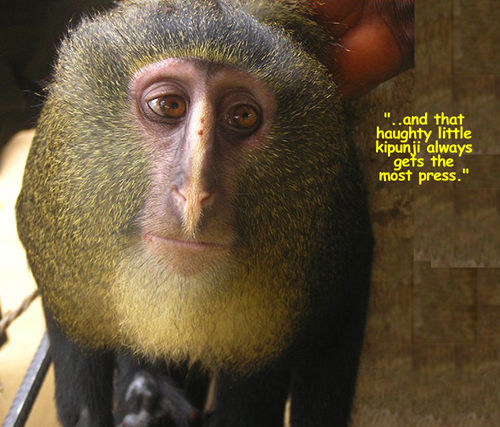 Two new monkeys discovered in Africa since 2003 suggest the continent is becoming more peaceful and interaction with scientists from the west has become healthier.

First seen in the jungles of The Congo in 2007, the lesula monkey (Cercopithecus lomamiensis) has now been studied enough to announce its discovery as a previously unknown species.

In 2003 in high forests of southern Tanzania, the kipunji (Rungwecebus kipunji) was discovered, and the latest discovery before that was the sun-tailed monkey in Gabon in 1984.

Both of the most recent discoveries were in areas in Africa inaccessible until only recently. Ironically, they were not inaccessible five decades ago – quite to the contrary. But with the advent of The Congo wars and decreased western aid after the collapse of the Cold War, much of accessible Africa became inaccessible or too unstable for field science.

I think it significant that before these two most recent discoveries, the sun-tailed in Gabon was in 1984 just before the collapse of the Cold War.

The most recent discoveries provide science with much more than just another listing. The odd behavior of the kipunji and the very unusual forest floor niche occupied by the lesula add surprise to previous understandings of African monkey ecology. DNA analysis, particularly with the kipunji, has aided immensely with the determination of biological divergence with other primates including man.

The lesula was first seen in 2007, subsequently documented, and this month the discovery published by John Hart. John, who along with his wife Terese, are veteran African field scientists. They are best known for their work with okapi and more recently, bonobo. Most of their adult lives have been spent in The Congo, but their published work recently has accelerated.

Where they are, now, in The Congo is not exactly a tourist destination. But the agreement of not just the Kinshasa government but local authorities and militia commanders has allowed the Harts much greater security and access. They have recently been awarded global funds to create a new jungle national park.

This would have been unheard of ten years ago. The Congo is far from pacified, particularly areas just to the south of where the Harts are now working.

But compared to only a decade ago, you might be forgiven for tagging the Harts’ field a honeymoon destination. This because of intensified United Nations (Security Council) involvement in The Congo, proactive diplomacy by world powers, and particularly with regards to The Congo, the exceptional work of the Obama administration embodied in the Dodd-Frank act.

The concerted efforts of global authorities and the proactive involvement of the United States during the last 3-4 years in The Congo and Somalia in particular has brought back hope that these chaotic and violent places may yet regain their legacy as truly an African paradise.

Have we turned a corner in African peace and global sanity?