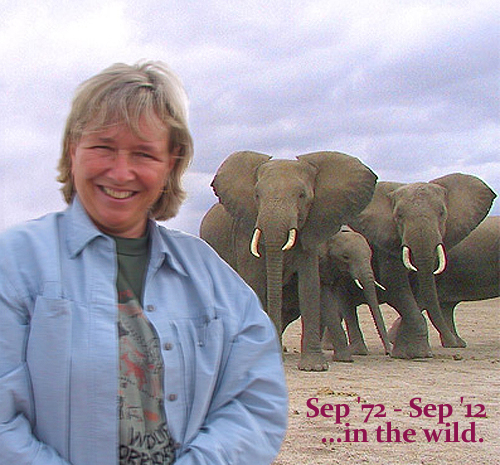 This month marks the 40th anniversary of a celebrated field researcher, Cynthia Moss. Ms. Moss began her field research in 1972 where she remains today, among the elephants of Amboseli in Kenya.

Moss was the 4th untrained volunteer woman who turned up in the field in the 1960s and early 1970s and became famous worldwide for big game conservation. Her species was elephant. The three who preceded her by a few years were Jane Goodall (chimps), Dian Fossey (mountain gorillas) and Birute Galdikas (orangutans).

The first three all obtained their first posts in Africa from the famous paleontologist Lewis Leakey who Vanity Fair argues chose them less for their potential as field researchers as for their amorous attachments to Leakey. Read the outstanding book by Virginia Morrell, Ancestral Passions.

Moss on the other hand seems to have been the only of the four recruited for potential field ability. Her mentor is the dean of elephant research in East Africa, Ian Douglas Hamilton.

Moss began studying elephants in what at the time and ever since has been one of the best elephant habitats in Africa, Amboseli national park in Kenya.

The four ladies popularized big game especially in America and harnessed enormous support for African conservation by bringing to life in very anthropomorphic ways their favorite animal. They would not have succeeded, today.

Not only were they untrained in biology or field research, none are very nice. They all operated as little dictators in their neck of Africa, and except for Moss, their science – especially their early science – was nothing short of grade-schoolish.

But it took several generations of researchers following them before that was understood. Today none of the four except Moss is cited for their research, but they are all rightfully honored for opening America’s eyes to the plight of big game conservation in Africa.

And without opening America’s eyes, there would not have been enough check books to open to fund the body of research and protection which has truly saved their favorite animals.

South Africans in particular are very sensitive about this, because good big game research had been going in southern Africa for nearly a century before these four wholly untrained “entertainers” hit the seen and captured America’s treasury.

But South Africa even before the excesses of extreme apartheid had never been able to attract the interest of American animal rights activists. Probably they didn’t want to.

In addition to being an inward society for centuries, South Africans had mistrusted Americans for a long while. There was never the chemistry between the two societies that would have enticed an American public to become Africa animal sensitive.

So East Africa was the perfect place for them. (Galdikas ultimately ended up in Malaysia.) Just coming out of the colonial era, no good extended animal research had been conducted of East Africa’s big game or primates.

Notably the great scientist, George Shaller of the Bronx Zoo, studied mountain gorillas that still today is considered to have been better research than Fossey’s. And he preceded her by several years. But Shaller never stayed anywhere very long.

That was what all four women did best: Stay.

Except for Fossey who was murdered in revenge for her likely racist attitude to Rwandans, the other three spent long lives with their chosen animal. In so doing they published popular books, were increasingly interviewed on television and invited as popular speakers throughout America. Like today’s better known animal people such as Jack Hanna, they were much more entertainers than scientists.

Moss was the only of the four who significantly contributed to science, and it’s probably the reason she’s the least known. The other three made their initial marks in personality scandals or with brash claims about their animals that have long since proved incorrect. Moss, a few years younger and later to the scene, conducted meticulous research with methods that are still used today by young researchers.

I had my own personal battles with the three in Africa, because they were all in the beginning defiant of tourism. Each was so protective of their distant escape to Africa, they shunned rich people’s donations rather than agree to welcome them into the field.

I as the guide was considered the facilitator of this disrespect and violation of their little self-proclaimed kingdoms. Guides were easier to blame and a lot less rich than the clients

That changed radically over time as it became apparent tourism was part and parcel to funding African conservation research. Today there is no important NGO that does not coordinate laymen tours to their areas of funded research.

Nevertheless, the personal animus developed between myself and all three African research ladies is still hard to ignore. At the time their sabotaging of some safari dear to my heart and essential to my bank account was tantamount to war in the field. I concede now, though, that without their personal and truly remarkable chutzpah East African conservation would likely be in a considerably worse state right now.

Moreover, I’m no more trained in tourism or guiding than they were in animal research. So despite our feuds, we can truly all be wrapped up into the same amateur motivation that drove us all: an intense love of Africa.

And this particular anniversary of Ms. Moss’ 40 years in the field is the easiest of them all to celebrate, since of all four women, her dedication has been the most sincere and has produced the most true science.

Happy Anniversary, Cynthia! As the last of the great matriarchs, none will assume your place, unlike the thousands of matriarchs you have nurtured and saved in the African wild.