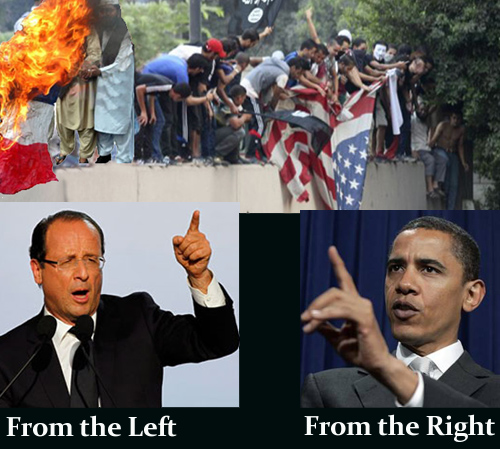 The French president’s push for foreign military intervention in Mali is a true leftist at work and frames Obama as the centrist he is.

French President Francois Hollande’s foreign policy in Africa is nearly identical to Obama, but their methods couldn’t be different.

The new socialist president of France is outspoken and quick to act. In Africa he is pushing for military intervention in many of the hot zones, including against extreme Islamists in Mali. He does not mince his words, either, labeling the Islamists in Mali with “unfathomable stupidity.”

Hollande is referring to Tuareg rebels that now control the historic city of Timbuktu, where reports are filtering out that many of the treasured monuments are being destroyed.

Timbuktu is one of the oldest cities in the interior of north Africa. Its world-famous “library” of ancient texts is an UNESCO World Heritage Site and has been reportedly destroyed. Just before Timbuktu fell from the control of the Mali government, several French were kidnapped and remain so.

So it’s understandable that Hollande will say forceful things, but the man’s wrath at what he considers common sense stupidities is not limited to places where French are held hostage.

He was one of the first to condemn the U.S. consulate attack in Benghazi. He’s one of the staunchest supporters of France’s very controversial rule prohibiting school children from veiling their heads even if they are Muslim. And he is leading the effort to assist the Syrian rebels.

What I find so revealing is how timid and centrist he makes Obama appear in contrast. And as I search for the links of evidence and delve more deeply into Hollande’s simple ideology, I realize it’s not that Obama “appears” to be centrist, Obama is centrist.

Centrist, today, whether in U.S. or worldwide politics is what hardly a decade ago we’d call right. The power of Ronald Reagan and his success in eliminating a huge part of the “socialist” world has manifest itself in extraordinarily powerful and lasting ways.

“Ends Justify Means” was an opprobrium 1960s communist haters placed on world socialists, but typical of far-right and far-left ideologies, they circle about and become each other. Both the communist world and the “free world” embrace ends-justify-means.

What I love about the new African politics producing great constitutions in Kenya and South Africa, for instance, is the utter ignoring of these archaic ideologies. New thinkers, especially in Africa, recognize the old adversaries socialism and free-market democracy are mostly meaningless in today’s interconnected and highly technical world.

I’m not suggesting Obama will start another war. But here’s the stark difference with someone like Hollande, and you be the judge as to which is better, or more effective:

As radical Islamists flee areas they flourished in only a decade ago – Afghanistan, the Horn of Africa, Yemen and Somalia – they are fleeing to the north of the continent, areas with weak governments and remote locales.

But they’re hugely weakened. The result is a lot of fracturing. Boko Haram, al-Shabaab, al-Ansari are versions of al-Qaeda, but they aren’t al-Qaeda and as best shown in Mali, they often fight one another.

In Mali, today, Tuareg rebels who have through some lone spokesman identified themselves as “Maoists” are actually the ones in control. They have swayed quite a distance from a religious ideology.

In pursuing the fugitives, Obama is relying on drones and secret missions. Hollande is simply straight-forward. He wants to expend no time or energy on deception. He calls for military intervention, he calls the Tuareg stupid and he condemns actions immediately that he sees as immoral.

That’s the difference between a centrist and a socialist, today. Their missions might be the same, but their methods are quite different.