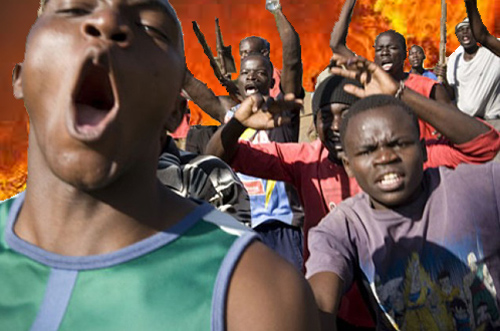 China and America are fighting on the streets of Kenya’s third largest town.

Kenya is preparing for its first election since the debacle and violence of 2007. Scheduled for March 4 most Kenyans hope for a peaceful and simple event that will be the crowning achievement in the creation of a new constitution.

But ghosts of the past haunt every Kenyan. The older generation – from which most of the candidates come – is still fiercely tribal. The hope for a peaceful and successful election rests squarely with the youth.

The younger educated generation is truly non-tribal. Most higher secondary education and above is composed of schools with a complete hodgepodge of Kenya’s tribes. The younger business class, the new entertainers and certainly the country’s vibrant media is without any tribal identity. Since more than half the population in Kenya is under 21, even statistics point to a hopeful future.

But in the Lake Victoria town of Kisumu, it is the youth turning tribal and violent. Kisumu is Kenya’s third largest city and its situation is at the intersection of two historically warring tribes, the Luo and Luhya.

Gang violence – not so dissimilar to the same type of gang violence found in America’s larger cities – is not new, but it’s becoming more powerful. In Kisumu the two principal rival gangs call themselves “America” and “China.”

It doesn’t matter which is which, the point is that young and angry Kenyans looking for a fight – perhaps because they are few jobs and little of a future – revert to tribal identities. And in their limited global lexicon they see the two greatest world enemies as China and America.

There is nothing ideological about either group that allies them with either China or America. The commonality is paramount power. Nothing is better or more powerful, richer or stronger, than America and China.

But what strikes me as saddest is that to be adopted by these warring youth gangs the labels have to carry an ultimate component of irreconcilability.

The darker skinned Luo boy may indeed see as much physical difference between the yellow Chinese and the pale-faced American as between himself and the browner Luhya. The languages are much different. The customs are different.

Read the comments that follow this news story about last weekend’s violence. The vitriolic references to “cuts” and “cutting” are referring to the ancient tradition that one tribe circumcised and one tribe didn’t. This is ultimate, primitive animus.

It all seems irreconcilable.

The fact is that the irreconcilability is truly much greater among these young tribal gangs in Kenya than between America and China. I hate to deflate their mutually assumed perfect labels, but America and China may be adversaries but they will never become enemies.

Despite what one of our presidential candidates might some day declare, the world’s two greatest economies are too interdependent upon one another to start a battle. Each is too involved in the other’s lives.

Perhaps these wayward Kenyans can learn from this. Perhaps they can understand arch rivals need not be arch enemies.