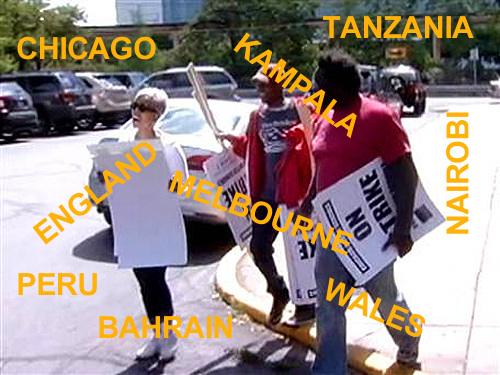 Teacher strikes in Africa and around the world mark a critical point in the global recession.

In Kenya the country’s entire educator workforce is on strike, from primary school through university. Last month’s teacher strike in Tanzania has been suspended only temporarily, and in Uganda teachers are poised to walk off the job in the next few weeks.

But there are also actions or looming actions in England and Wales, Australia and of course in my home city of Chicago. Teachers are also threatening work action in Peru and South Africa. Teacher leaders have been jailed in Bahrain which could once again destabilize that city-state.

What’s going on? There’s just too many educator work actions in too many widely different places to suggest anything like coincidence.

The Chicago strike is not about pay; the Kenya strike is about pay; and from the Mideast to Asia the range of issues is as wide as the geography. But in the end it is all about the bottom line. It’s all about the cost of education and the widely presumed notion that it isn’t working well.

I have no idea if education is working well in London or Sydney or Bahrain, and I’m pretty convinced it’s not working as well as it should in Chicago or Nairobi. But actually when you stand back from the globe and look at the turmoil, not even that seems to be the point!

Education is among the last of public services to be hurt by a global recession. When an industrial plant closes, usually a sizeable chunk of the workforce is let go all at once. Not so with education. You can’t close schools wholesale. Instead you inch up the class size, reduce the scope of services and month after month squeeze the teachers for a little bit more.

If the squeeze goes on for long enough it pops. And that’s what’s happening, now.

Conservatives around the world see this as an opportunity to trim excess and improve delivery. Progressives see just the opposite, an attempt to balance a wider social imbalance on an already stressed system.

But that’s not the point of this blog.

When such diverse societies in so many places in the world begin battles with their educators over such a range of issues, it means that globally society is really being stressed to new and maybe dangerous points.

There is a way out of this. And put aside for a minute the enormously different issues from one school system to another across the world. Education distress worldwide is an indicator that in sum the global recession isn’t easing; it’s getting worse.

Yet these four countries have all used or are using now stimulus, and they are all much better off than countries like Britain and Peru which have opted for austerity.

The laws of economics trump all other laws.

Many African countries are on the cusp of having to make the decision about stimulus or austerity, because when the developed world tanked into recession, they actually benefited for a few years. Their decisions about stimulus vs. austerity are only now being legislated.

They should take heed carefully. The U.S. did it correctly; Britain did not. If we can get enough of the world to realize this and follow suit, then the education wars won’t be followed by wars in health care, civil and national defense.