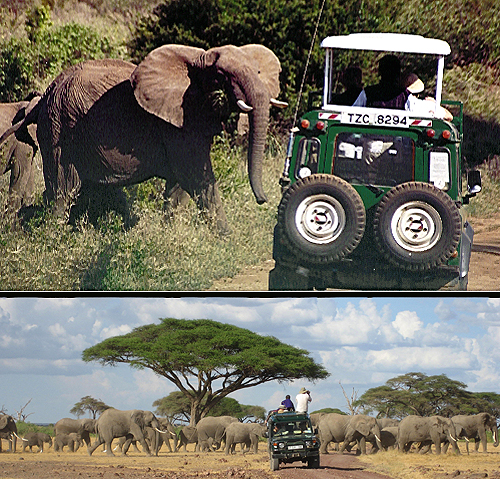 Elephant researcher Charles Foley, whose principal research camp is located inside Tarangire National Park, reported this year that elephants that principally use Tarangire as their habitat are reproducing at a 7% rate.

For a large mammal that is nearly inconceivable. Reproductive rates vary in the extreme in the wild. This is principally because the reproductive rate is impacted so seriously by climate which immediately impacts food source. Wild animals tend not to breed when their normal habitat is disrupted.

And for the last several decades in Africa, “normal habitat” hardly exists except in a few well managed large reserves like Kruger in South Africa. But Kruger is famous for sustainable culling of big game, including giraffe, driven not by reproductive rates but the carrying capacity of the environment.

A stable wild animal population in a stable wild animal environment generally means that the animals which die, naturally or otherwise, are equally replaced by new births. In the Tarangire area we can speculate with some evidence that such a “stable” rate would be about 2%, not 7%.

But that population of elephants reproducing at a 7% rate isn’t growing. Why?

The short answer is poaching. There have been numerous articles recently on the increase in elephant poaching in Tanzania. See my last blog Friday for a summary.

There’s no other reasonable explanation. Tanzanian elephant management has been poor at best despite having some of the finest big game field researchers in the world. The failure lies squarely with the Tanzanian government, although it’s hard to argue their failures in wildlife management are any greater than in government across the board.

So despite many efforts to create elephant corridors that would widen dispersal of various populations (which in turn would complicate attempts to use reproductive rates for effective management) few of these corridors have been successfully implemented.

More or less the Tarangire population is contained. During the wet season a large portion of the herds move eastwards of the park. Individuals are reported traveling between Tarangire and Manyara (I’ve seen them myself on numerous occasions) but probably not in any sufficient numbers to validate dispersal theories.

A huge number of elephants are being poached.

But as I stated Friday and before, this is not a crisis that threatens the overall population, as was the case in the 1970s and 80s. In a weird and ironic way, one might postulate that poaching has become a current ecological component of a stable population.

That’s not a comfortable idea. And it doesn’t mean that poaching is good. But it does mean at least for the present that South African notions of management that aggressively embrace culling won’t work if poaching isn’t first contained.

But likewise, it means if poaching is contained, culling becomes immediately necessary.

It’s an extraordinary balancing act, and we all know that once poaching at this presumed level has become a part of a local culture, it’s near impossible to curtail. The likelihood that Tanzania could get it together in any reasonable period of time to actually limit poaching is as about as likely as finding a tiger in the Serengeti.

Poaching is not good for more reasons than breaking the specific laws against it. The sustained breaking of any laws leads to a lawless culture. The chain of sale of the ivory through the local middleman, corrupt politician and bribed cargo authority spreads anarchy through a social system. The pile of meat that’s left isn’t exactly inspected by local health officials before being dispersed through the community.

And the temper of the elephants being hunted down is exacerbated, and a calm elephant isn’t exactly a friendly beast to begin with.

So I’m not advocating allowing the status quo to continue. But I think it’s extremely important that everyone realize there are two very different sides to this management problem, and that dealing with one alone won’t work.

Poaching is no longer a separate issue from culling in Tanzania.