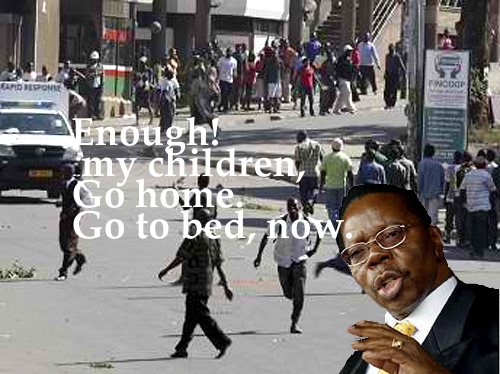 Historically peaceful, extremely little, almost hidden Malawi is blowing up from the inside, rattling and perhaps destroying one of Africa’s last dictators. I’m amazed he doesn’t seem to understand.

Twevolution’s inevitable creep over Africa now covers much of the continent like a jar of syrup spilled over an old flat stone. It stopped and moved around a couple intransigent bulges like the Central African Republic and Zimbabwe, pooled in the great Egyptian depression, slipped over polished parts like Cameroon where its viscosity will determine its effect, and finally has reached little hidden away Malawi.

Wednesday and Thursday protests erupted in all the major Malawian cities, which is four: Mzuzu, Lilongwe, Blantyre and Karonga. After lots of tear gas and live ammunition were used by police, eighteen people were left dead and hundreds wounded.

“Enough is enough,” Bloomberg news quoted him today. “I will smoke you out wherever you are because you have no right to destroy our peace,” Mutharika said. “I have been patient long enough.”

But so have the people, and that’s what I just don’t understand. And here are the distinctions between the people of Malawi, and the people of the Central African Republic (CAR), Zimbabwe and perhaps, Cameroon.

There aren’t a lot of people in the CAR, relative to other African countries. They live in Africa’s deepest jungle, have a very low level of development, and for at least two generations have lived in a state of if not constant war, constant no peace. It’s similar to Yemen or Afghanistan, where very disparate peoples are separated by awesome geography. It’s hard to get enough people for a few tables of bridge.

Zimbabwe was extremely rich relative to other African countries. When the dictator Mugabe slowly extended his control, there was a lot to pass around. There is now a very large section of the people, a minority to be sure but significant, who depend upon him, and they hold what is left of the riches and power. It is hard for a eviscerated majority to wrest control.

Cameroon is more similar to the CAR than Zimbabwe, but it is far more developed than the CAR and has more riches like huge gas fields and some mining. I think that gas is going to explode big time this fall at the election. I think with Cameroon, it’s just a matter of time, and not very long time.

But Malawi is different from them all. Malawi until twevolution was one of the most stable African countries, mainly because of its deft policies during the years of South Africa’s apartheid regime. Malawi was the bridge between South Africa and the rest of Africa, the mediator, the liaison between what ostensibly was an impossible rift.

South Africa’s economy now and before is about twenty times as great as the rest of black Africa, so it is a force no matter how ideologically unappealing it was, that must be reckoned with.

During apartheid the only way you could fly into South Africa, for instance, from Kenya was to connect through Malawi. If Uganda needed grain grown in South Africa, it bought the grain from agriculturally poor Malawi, who bought it from South Africa.

When you used those old land lines to call Johannesburg from Kigali, the last great switch was in Blantyre (Malawi). If you needed to exchange South African Rand that Switzerland wanted to pay you with for a safari in Ethiopia, it would be exchanged in Blantyre.

Malawi prospered during apartheid. South African citizens and businesses could own all sorts of things there, but so could Egyptians and Tanzanians. Malawi and the undesirable Cape Verde Islands were the only two places in this massive continent where South Africans and non South Africans could be seen vacationing together.

So South Africans developed Malawian tourism big time. Lake Malawi, one of the most beautiful deep water lakes in the world, is rimmed with South African mansions and tourist resorts. The relatively densely populated country was cleared out a bit (by South Africans) to create two modest big game reserves.

South Africa is preparing to celebrate its 20th anniversary freed from apartheid in a few years. Malawi hasn’t done so well the last several decades, relative to the rest of Africa.

Twevolution frees initiative, severs the privileges of those who were born into rule or class from the riches and potentials of the country. Malawi should have made these changes long before twevolution arrived last year. But it didn’t.

Mutharika will not be able to squash this revolution, as Mugabe has in Zimbabwe and Bozize has in the CAR, and as Biya is trying desperately to do in the Cameroon. Mutharika does not have situations like them.