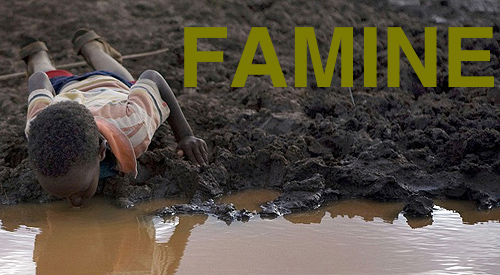 Famine is spreading across the Horn of Africa and threatens a world crisis. It’s not principally the result of drought. It’s due to political and social circumstances that if left unaddressed will begin one terrible unending famine capable of wiping out entire populations and massively stressing global resources.

News junkies crave disasters and power the news everywhere. The famine reporting I’m reading now is so driven by this that even impeccable organizations like one of my daily necessities, Reuters Africa, are failing to report correctly.

Reuters’ report, today, essentially attributes the main cause for the famine to “successive seasons of failed rains.”

Not true. There has been only one failed rainy season in The Horn so far.

The famine is centered in Somalia, and because of the fighting there, good weather data doesn’t exist. But we do have good weather data very nearby, where nearly 400,000 refugees have fled just over the border into Kenya, at Mandera.

This is in Kenya’s far north in a climate zone nearly identical to most of Somalia. See the “Precipitation MANDERA, KENYA” chart prepared by NOA.

The chart shows that the normal Nov-Dec rainy season received just about 2″ of rain, which is about three-quarters of normal. The usually heavier Mar-May season failed completely. That one rainy season failure would not have caused famine in the past.

Then why is there now a looming crisis?

Because there’s a war. The people in Somalia have been disrupted from their normal routines. Before war ravaged The Horn a single rainy season failure was easily augmented by relying on stored food from surplus harvests, or from importing food from further south.

But now even when the rains are good, such as a year ago, the Somali’s didn’t grow much food. They weren’t planting; they were shooting.

And while there is surplus food in the world, even in the immediate area, it isn’t getting to the famine area. AID agencies can’t give away free food.

And Tanzania, which has a bumper harvest so far this year, has banned free market agricultural sales to the north, for fear it will deplete its own surpluses. This has severely effected the relief effort in Somalia, not to mention angered northern Tanzanian farmers.

Moving south into Kenya and Tanzania, we have a slightly different story.

Look at NOA’s charts for NAIROBI and MWANZA. 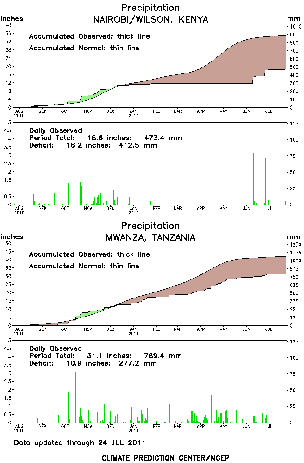 An imaginary line from Nairobi, Kenya, to Mwanza, Tanzania, more or less transects the most densely populated areas of that region as well as the principal game viewing areas enjoyed by foreign tourists.

Over the course of the last year, Nairobi is running a 47% deficit in normal precipitation, and Mwanza is running a 26% deficit. “Running” is the key word. A careful reading of the graph shows that the problem occurred in the Feb-Jun period. That’s when the top (normal) and bottom (actual) lines diverge. That season failed completely in Nairobi and was weak in Mwanza.

But note that the track from May onwards in Mwanza is normal, and in fact shows more rain than normal in Nairobi.

We know, too, from photos coming from northern Tanzania that there have been recent rains there. It was thunderstorming in some Nairobi areas last night. This is totally abnormal. The end of July is normally a completely dry time.

Normal isn’t normal, anymore. The seasons for rains are changing or growing erratic due to climate change.

Go into a national park, and things look pretty normal. The giraffe, wildebeest, buffalo and zebra look fine. But just outside the park, Maasai cattle are dying.

More and more, the growing numbers of Maasai cattle depend upon hay-like supplements. Farmers who still plant in traditional ways, presuming the rains will come in March (when in fact, this year it appears they are coming, now), lose their crops. There is no hay. Even if there were hay, there are probably too many cattle.

The situation applies to people, too. Food prices increase because less was produced, and those rich enough have no problem, as is the case in most urban areas like Nairobi. But outside urban areas, crises occur almost overnight.

Food prices increase. Poor people have less money. Truck farmers take their food to areas where it can be bought and stop deliveries to remote areas where the poor can’t pay.

Nairobi announced this week that a series of power outages were now planned, because of the “poor rains” last season. The reservoirs are too low to produce enough power. “Enough” is a more important word in that last sentence than “low.”

In years past, enough power was cranked out even after two or three failed rainy seasons. Not now. One failed season and the power goes out.

But neither is due to drought, at least drought as has been historically defined. It’s due to war and the failure to deal with climate change.

It’s a failure of humankind. And any remedy for that may be as unattainable as controlling the weather.