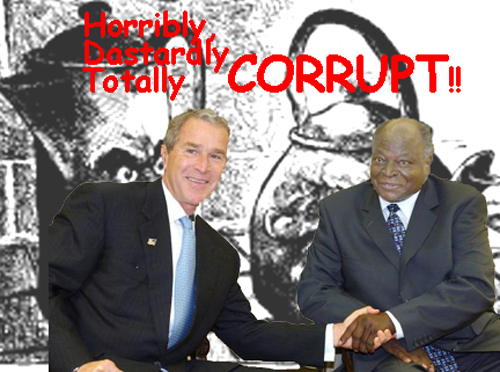 I am sick of westerners criticizing corruption in Africa, and recent reports from Africa’s 54th country, the new South Sudan, reveal how hypocritical, racist and just plain unfair corruption charges against Africa often are.

The new South Sudan is suddenly rich by most African standards, because of its ownership – yet to be fully defined – of Sudan’s rich oil fields. And temporarily, at least, it’s enjoying huge amounts of western aid to get itself going. So there’s a lot of cash, and there’s been a lot of cash for several years.

There are two main reasons that criticizing Africa for corruption is so wrong. First, the donor encourages corruption. Second, the donor is corrupt.

Giving money without strict accountability is lunacy, yet that is what most of the donor group in the South Sudan is doing, including the U.S. It has led to some nearly laughable acts of corruption. When a dirt poor economy is suddenly flooded with nonspecific money, expect the slime to start skimming.

Only Canada, among all the donor nations, has retained the foresight to insist on its aid going directly to the projects for which it was allocated. All other western countries, including the U.S., send cash – however specified – through the new government.

So Canada alone can obtain relatively good accountability of its aid.

The tradition of foreign aid being allocated for specific projects – like water treatment, for instance – but then being given to the recipient country rather than its water works directly, has a long history. Part of it is simplicity.

The U.S. gives South Sudan about $300 million every year, and the largest portion of this is composed of specific development projects. Last year, for example, there were dozens of specific projects mentioned in the aid grant.

To send this as smaller pieces to each of the projects is tedious. It also requires much more oversight, as Canada now does, as it more carefully evaluates each and every project. This is ideally the way to go, but that would take a greater staff in USAid than the U.S. Congress is willing to fund.

So while conservatives in Congress decry foreign aid for being corrupt, they are exactly the ones who make it so.

It would be much better to reduce the aid – as Canada has done – but insist on the separate project funding and accountability by using what was reduced to fund additional Canadian staff to oversee the funding.

Brilliant, but in America ideologically impossible. Can you imagine any reason – even if it saves money – that Congress would accept to increase the federal workforce?

Even worse, can you imagine the battles in Congress over whether to fund this water treatment plant in Juba, because corruption was discovered there, or oil field catering services further north, because Haliburton is involved?

For both the structural and ideological reasons that restrain America’s way of giving aid, most all of the donor countries behave similarly.

“O Canada, we stand on guard for thee!”

Corruption is a learned behavior. It happens to be remarkably anathema to virtually all subsistence economies and traditional societies. It is a modern, capitalistic phenomenon.

Monday, Macmillan agreed in a UK court that it had bribed (massively) South Sudan officials to get the country’s school text book market.

It would have been a lucrative deal. Donor nations had given the World Bank nearly $50 million to develop educational materials for the new nation, and Macmillan was bidding on the contract. Macmillan is now barred from working with donor agencies for … three years.

Three years?!! So, you mean, after three years they can bribe some more?

This stalwart of America academia is also under investigation, now, for its similar contracts in Rwanda, Uganda and Zambia, not your cleanest of countries.

In the brilliant blog,“South Sudan – a Subsidiary of Texas“, Jordahl reports how an American company bought a hunk of The Sudan equal in size to the state of Delaware for a questionable payment to a possibly fictitious cooperative of ….

The company, well, it isn’t even a company. It’s a hedge fund without a website. And it now owns a 49-year lease on land in the South Sudan equal in size to the state in which it is legally incorporated.

Not a lot of corruption money, you say? No, it isn’t. And it all went to a fictitious cooperative of bribed Southern Sudanese who agreed to a revenue split of 60/40 on anything developed there.

These are just two examples, one outright corruption, the other mostly clever theft, begun by the westerners who decry the corruption of Africa.

It’s called calling the kettle black. And, by the way, it’s infectious.

There are legions more South Sudanese who want a corrupt-free society than the criminals who live there. But the west is rewarding criminals while neglecting the honest entrepreneur. Who’s really to blame?