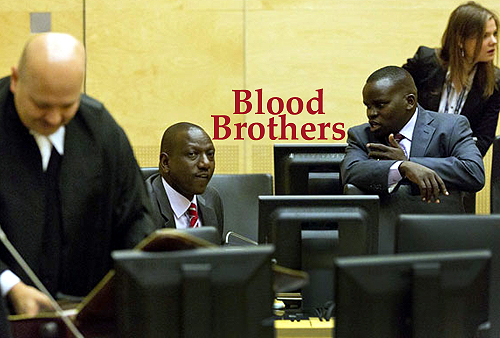 The opening day in the trial of Kenya’s Deputy President, William Ruto, lifted the curtains from a gruesome, planned ethnic genocide that he allegedly orchestrated with the precision of an all-out war, including purchases of weapons from Uganda and The Sudan.

Ruto is being tried simultaneously with Joshua Arap Sang, a radio broadcaster, who is specifically accused of using the radio station KASS-FM to mobilize ethnic forces when requested by Ruto.

“The prosecution alleges that the accused William Samoei Ruto and Joshua arap Sang intentionally exploited to their own advantage these deep-seated political, ethnic, social and economic issues during the 2007 electoral campaign.”

The 64-page indictment is a gruesome, detailed description of backdoor meetings, careful organization of weapons and money, and the meticulous assembly of a chain of command the prosecution is now calling “The Network.” Ruto was the alleged head of The Network.

Former ministers in the civilian government, former Army and police generals and commanders, district commissioners and even local youth leaders were all carefully organized into a chain of command with the sole intention of eliminating “unwanted communities,” in particular, the Kikuyu.

The Network was organized well in advance of the 2007/2008 election and would go into action, according to the ICC prosecution, if the election were lost by Ruto. Ruto was part of a coalition of western Kenyan tribes including the Kalenjin and Luo, contesting the reelection of Mwai Kibaki, who was a member of the country’s largest tribe, the Kikuyu.

As I explained yesterday, the Kikuyu and Luo and Kalenjin were historical blood enemies. Also as I’ve written earlier, the ethnic division over many years adopted social and economic characteristics, just as Northern Ireland became Catholic and poor and southern Ireland was protestant and rich; or as Christian Serbs in Bosnia were far better off than Muslims, there.

So the ostensible election of 2007 was almost quintessentially typical of the modern era: the poor, socialists, redistribute-the-wealth group versus the established, rich, capitalists already in power.

Yesterday’s first day of the Ruto trial did make real news. The ICC prosecutor backed off her public suggestions that Ruto explicitly was involved in the ethnic cleansing and painted him more as the backroom organizer, using Kalenjin proverbs and winks of the eye to order attacks.

That is a serious blow to the prosecution in this world court where proof of guilt is a much higher bar to attain than in most other sovereign courts around the world.

The only judgment issued by the Court yesterday was that the other trial of Kenya’s President, Uhuru Kenyatta, will be held on alternating four-week periods with this one, so that the sovereign nation of Kenya is never without a leader.

And as you’ve guessed, Kenyatta’s trial will be very similar to Ruto’s. The two, now serving together as Kenya’s chief executives, are accused of trying to eliminate each other through ethnic cleansing.

Talk about Team of Rivals…

But at long last things are beginning to make sense, in the extraordinary Kenyan way that makes Shakespearean dramas look like third grade fairy tales.

Presuming Kenyatta’s strategy is similar to Ruto’s, the accused really believe they will prevail as not guilty. And with the ICC backing off the contention they gave explicit orders, for the first time in public, that seems possible.

And if that comes to pass, and if the two leaders of the historical arch enemies that wanted to kill each other, raise a modern Kenya from the ashes, what does that mean?

That like Obama threatening to bomb Syria was all that was needed to eliminate its chemical weapons, that trying to put the two Kenyan leaders in the clinker for the rest of their lives for trying to kill each other makes them friendly nation builders?

How good are these bad guys? Are miracles real?

“Miracles are a retelling in small letters of the very same story which is written across the whole world in letters too large for some of us to see.” – C. S. Lewis