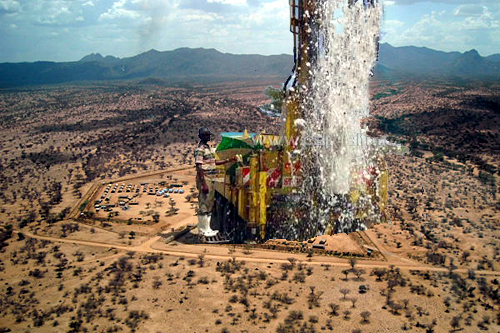 Slowly we are discovering a deeper layer inside earth that is renewing oil and gas, and now, the most important resource of all, water. Africa is jubilant.

February’s initial discovery in the far northwest deserts of Kenya was officially announced yesterday, and it is quickly becoming the most important story in Africa.

If estimates are correct, Kenya’s reserves of clean water have just been multiplied by ten. The daily consumption potential of Kenya’s current fresh water will be doubled.

Fresh water is one of Africa’s greatest problems. More than a third of the estimated 884 million people worldwide without access to clean water live in sub-Saharan Africa.

The aquifer of 250 billion cubic meters of water lies a thousand feet under one of the most inhospitable places on earth, and is similar to and even smaller than an aquifer discovered five years ago under the Sudanese desert.

That aquifer in Darfur has not been developed because of the violence in the area. Although the area in northwest Kenya is not wholly peaceful (my novel, Chasm Gorge, to be published soon is set in this area) there is little indication that tribal squabbles will impede this massive development.

The area is a sparsely populated one and diminishing resources is the friction between three hostile groups, the Turkana, Pokot and Borana. Their enmity has existed for centuries and has been exaggerated by population growth facilitated in part by better services and a modernizing government.

Quick access to large amounts of fresh, clean water in Turkana is likely to ease tribal hostilities in this case, and so would stand in marked contrast to what is happening in Darfur where hostilities have long ago matured into all out war.

Although distant, remote and very deep, the water discovery is so profound that Kenyan officials are looking into the possibility of creating a river as a method of transporting the discovery to more populated areas further south in the country.

But long before that happens, it’s clear that the people of Turkana will have new and sizable access to fresh water. While currently daily water needs in Turkana are almost exclusively for personal and urgent use, this new discovery raises the prospect of significant agricultural irrigation.

As with the earlier discovery in Darfur, it seems the aquifer is renewable and while the process is not wholly understood, the vast desert area may be sponging what moisture does fall onto it rather than give most of it up for evaporation, as previously thought.

The Kenyan discovery was a joint effort between UNESCO and several private companies whose technologies are normally used to discover deep-earth oil reserves.

Without UNESCO’s lead on the project it is likely it would never have happened. These new technologies are being monopolized for the discovery and extraction of oil. Once again, it’s the international community and its organized institutions that are saving lives and working for the ordinary soul.

We must wonder what is happening to Mother Earth as her insides are gutted out. But for the time being, there is only reason for celebration.