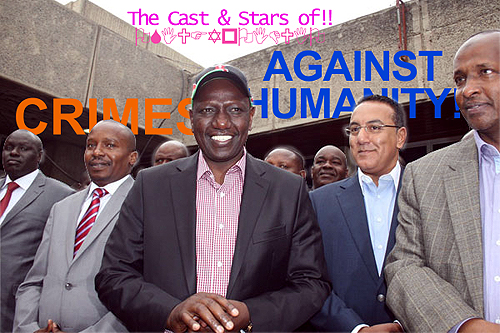 If you were riveted by the O.J. Simpson trial, you’ll want to adjust your cable contract to get NTV-Kenya: “Tomorrow! Live! The World Trial of Kenya’s sitting President and Vice President for Crimes Against Humanity!”

This doesn’t sound real. Neither Steven Spielberg or William Shakespeare could have concocted this one. This isn’t like a revolutionary tribunal. It isn’t Madame DeFarge and her fellow citizen hookers watching the old king hanged.

William Ruto, the Deputy (Vice) President of Kenya, flew to The Netherlands yesterday … with, by the way, 100 elected members of the current Kenyan Parliament … to stand trial in The Hague’s International Criminal Court (ICC) which the country of Kenya agrees has the authority to imprison those the ICC finds guilty for up to life.

The President of Kenya, Uhuru Kenyatta, will begin his trial on November 12.

The bill to the Kenyan government for participating in this ultimate fiasco is astronomical by Kenyan standards. Just consider today’s expense report: Imagine George Bush flying back and forth in Air Force One (and probably Air Force Two to bring Republican Senators and Congressmen) to Amsterdam to allow himself to answer unpressed indictments by the ICC regarding his War in Iraq.

I thought a review of why we’re here might help you.

The court in question is the World Court, the ICC. Americans don’t know much about it, because America refuses to participate:

THE COURT
As of May 2013, 122 states are parties to the ICC, including all of South America, nearly all of Europe, most of Oceania and roughly half of Africa. Another 31 countries, including Russia, have signed but not ratified the treaty.

The progenitors of the ICC originated more than a century ago and include the Red Cross, when the world tried (and failed) to prosecute those responsible for the Franco-Russian War of 1872. The idea was reborn after World War I and then, again, after World War II. The Nuremberg trials finally prompted the United Nations to embrace the idea.

But having studied it endlessly and virtually created it, the UN was stymied
from setting up The Court by the politics of the Cold War.

In June, 1989, in response to worldwide drug trafficking and the imminent Bosnian War, the world more or less (including no America) got together and formed the court as an entity separate from the UN.

So even without America, China and full Russian participation, the Court has grown to represent world justice. Its famous trials include the wicked men of Bosnia, Liberia and Rwanda. These managers of genocide are now behind bars in Holland.

HOW DID KENYA GET THERE?
The democratic election in Kenya at the end of 2007 was miserably mishandled, almost certainly fraudulent and whatever else, too close to call. It was, however, the first truly free election Kenya had ever had, because the two main contestants for the Presidency were so far apart ideologically.

And so they did, again. This time with the extremely legitimate pretext of a major election gone awry. Within a month of the election, more than 1300 people had been killed but more importantly, in vicious videoed attacks that devolved into ethnic cleansing.

And even more important than that, really, more than a quarter million people were displaced.

The U.S., Britain and Kofi Annan put Kenya back together. Six months after the catastrophe, the two contestants were sharing power, and things were working out. In fact, they worked out so beautifully that Kenya’s then newly written constitution is really a model for modern governance.

Part of the all-party agreement that put the country back together was to determine who had fomented the violence and to prosecute them … in Kenya. It was almost an afterthought that added to the agreement that if Kenya couldn’t get it together to hold the trials, or to mount the investigation, that if Kenya wanted, the ICC would step in.

That’s what happened. Kenya couldn’t get it together. At first it just seemed like too herculean albeit too expensive a task. So the old Parliament that wrote the new constitution hemmed and hawed, debated and ignored, and finally defaulted to the ICC.

Which was really quite reluctant to take the case on. After all, as horrible as 2007/2008 was to every Kenyan, it was nowhere near as horrible as the cases the ICC had been hearing: like the Hutu massacre of 800,000 Watutsis.

The ICC did its work. Among those to be indicted were the leaders of Kenya’s biggest tribe, the capitalists, Uhuru Kenyatta, son of the founder of the country; and the leader of an influential smaller tribe hated by the Kikuyu and who had supported the socialists, the Kalenjin, William Ruto.

Whoa. Embarrassing, to be sure. Kind of riled Kenyans of similar stripes. Parliament exploded but did nothing. Parliament considered giving immunity to these guys, but didn’t. The trials were set.

William Ruto and Uhuru Kenyatta filed to contest the election of 2012 after they’d been indicted.

Parliament choked. The Presidential Commission authorizing candidates didn’t know what to do. Parliament said do it. The two men indicted for crimes against humanity became candidates.

… these two murderous rivals combined to form a single party. The leader of the biggest tribe, Kenyatta, would stand for the presidency. The other guy, William Ruto and former arch enemy, would stand with him for the vice president.

Tomorrow, I speculate on what the hell is going on, or, “How Good can a Bad Guy be?”