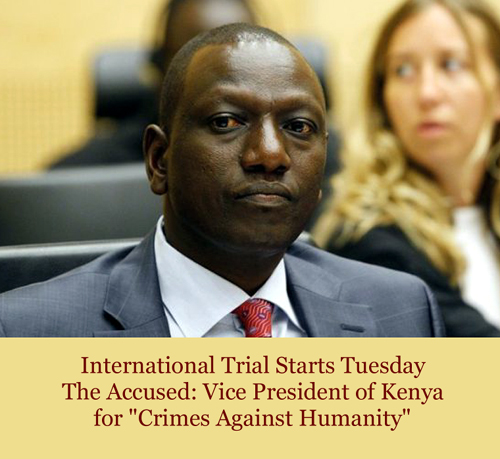 Tuesday the Vice President of Kenya personally stands on trial in The Hague for crimes against humanity. Two months later, the President will begin his trial, there.

William Ruto, the Deputy President of Kenya, will be accompanied by about 100 recently elected Members of Parliament who obviously support him.

It is, indeed, one of the most curious performances of achieving justice the world has ever seen. A Nairobi commentator put it this way this morning:

“Most international criminal tribunals have been set up as courts of victors to punish the losers,“ explains Luis Franceschi, Dean of Nairobi’s Strathmore Law School, citing the great trials that followed great wars and historic massacres.

This time in Kenya, though, “The accused [are] not past rulers or sitting presidents, but newly elected leaders. We are witnessing one of those uncommon ironies where democracy seems to clash with justice.”

Add to this complexity yesterday’s action by the Kenyan Parliament to withdraw from the International Court that is holding the trials, and you have the kind of governmental and political mess that has stymied Kenya for so long.

There’s more! The International Criminal Court (ICC) is an independent, global judiciary created and supported by 122 sovereign nations. Kenya is one of those. Proposed as a part of the remedial actions taken after World War II to try war criminals, it became a serious global justice tool after opposition to it by Soviet block allies ended with the end of the Cold War in 1989.

The U.S. is one of the few nations to have specifically rejected the Treaty of Rome which formed the ICC. The other two – you guessed it – are Russia and China.

Yesterday in Kenya’s Parliamentary debate, America was invoked time and again as a reason for Kenya to withdraw.

In a finely worded statement the U.S. issued after the Parliamentary debate, undoubtedly hoping no one would read it because of the Syria Crisis and G20 meeting, America urged Kenya “to fulfill its commitments to seek justice for the victims of the 2007-2008 post-election violence.”

This is a major step back from much more severe statements America made earlier, including “severe consequences” to Kenya if action like this were taken.

Kind of hard to tell Kenya to go to trial in The Hague when you intend to ignore your staunchest ally and the rest of the world that are telling you not to bomb Syria.

This is a mess.

It would have been a mess even if the U.S. hadn’t muddled its diplomacy in Kenya or its image abroad, but believe me, that isn’t helping.

There is every indication at the moment that Kenya’s duly elected and pretty popular top two leaders will stand trial in an international court. Last week technicians from Kenya were allowed into the court chambers to hi-tech wire it up, so that people in Kenya could have real time coverage and communications.

The charges against them and three others are that they were the principals in organizing and funding if not actually managing the terrible violence that followed the disputed 2007/08 elections.

More than 1300 people were killed, many horribly, but perhaps more significantly more than a quarter million displaced. The issue of “IDPs” (internally displaced persons) remains a contentious and difficult one in Kenya even today.

The Hague is conducting The Trial because it was asked to by the Kenyan Parliament.

Not the current Parliament. The current Parliament is entirely new, the first one under a wonderful new constitution adopted last year. But the old Parliament that was viced together by Kofi Annan and others who finally brought peace to the country by March, 2008, first accepted that it must hold trials, then wavered, then asked the ICC to take over.

The ICC did so reluctantly and laboriously. But once things got going, they became unstoppable.

Neither the accused current president or vice president held significant power in the coalition government that brought Kenya out of the cauldron of violence into the new light of a really good constitution.

Both were charged by the ICC as being among the main culprits before they even announced they were running for the leaders of the country created by the new constitution.

The old Parliament debated furiously whether as accused they should even be allowed to stand as candidates, and finally decided they could.

Meanwhile, the ICC was rounding up tons of evidence. It takes the ICC years to achieve enough evidence to bring someone to trial, and in this case they did so very quickly. Trial dates were set initially before Kenya’s presidential election.

But it became clear at that time that the two accused were also very popular in Kenya. Negotiations that kept the old Parliament on board with the ICC successfully pushed the trial dates until after the elections.

Then, the accused won by such a slim margin that Kenya’s newly constituted Supreme Court finally had to affirm the razor thin outcome.

As Uhuru Kenyatta, the current president, and William Ruto, the current vice president, solidified their power and control over the country, witnesses that the ICC had assembled for the trial began to withdraw.

Of an original 30 witnesses, there are today less than half that willing to testify. You can imagine why.

And to make this entire blog meaningless, the process of Kenya withdrawing from the Treaty of Rome that it signed fifteen years ago could not possibly conclude before these trials are over.

Sane minds in Kenya implored Parliament not to become “hysterical” and do what they did yesterday, accomplishing essentially nothing but making Kenya look odd at best, juvenile at worse.

I am absolutely fascinated at this whole process. Clearly, Kenyatta and Ruto if convicted are not going to jail. They’d go home, first, and then stay there.

So why go through the antics in the first place?

They believe they can prove innocence. I suppose we should remain open-minded about this. You know, innocent until proven guilty, and all that. And to be sure a guilty verdict in The Hague requires a lot more evidence and certainty than in a normal court.

It is, indeed possible, that despite all the evidence so far assembled against these two men, they could be found not guilty.

Even so, they’re bad guys. We don’t need an international court to sift through the volumes of news reports that have already convicted Kenyatta and Ruto in the international court of public opinion and I believe that judgment has been a fair one. Although the U.S.’ stand is losing credibility, there’s not a single European power willing to engage either of these leaders.

But in the duplicitous world of global power politics, a not guilty verdict from The Hague might make an appointment in Westminster easier to arrange.