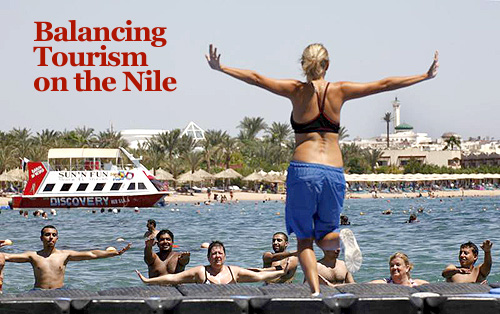 If you’re interested in a good deal in Egypt, time is running out. Good times in Egypt are on the march. But good deals are coming to an end.

Following a press release from Europe’s largest tour company, KUONI, on Friday it rescinded several of its deals in Egypt over the weekend.

KUONI stopped offering multiple night incentives and cash discounts on many of its upmarket properties and cruises in Egypt. Many of these are still available for mid- and down-market products, but top ranked hotels and cruise ships are now back to rack rates.

This and many other indications suggest that unless there’s some serious reversal in the political situation in Egypt, good deals there may be ending.

Tourism is a great barometer – a leading indicator – of a society’s perceived tranquility. I say “perceived” because as tourism skyrocketed in China, it would be hard to argue that areas of Tibet were “tranquil” or that progressive movements were being liberated.

And it’s perception, rather than reality, which drives tourism.

Take the current civil violence between Muslims and Christians in Egypt which broke out, again, this weekend. And last weekend was worse: 12 Copts were killed following a peculiar rumor that they were trying to force a Muslim woman to convert. (There were an estimated 65,000 tourists in Egypt last week.)

But on Christmas Eve before the revolution, 22 Copts were killed in the same type of religious violence. This was the highest of high tourist seasons in Egypt. An estimated one million tourists were in Egypt at the time, and that news story didn’t effect travel there one iota.

Coptic/Muslim violence has been ongoing in Egypt literally for millennia, but the story has rarely percolated into the world press. But Egypt is in the news, now – as it should be. Coptic oppression, like the oppression of women and Muslim activists, will make world headlines, now. And perhaps this new spotlight on problems the country has suffered for a long time will hasten resolution.

I think tourists know this. And the growing numbers of tourism to Egypt suggest it.

Egypt is just a bit smaller than South Africa. Last year’s hosting of the World Cup in South Africa help to boost its annual tourist figures to nearly 9 million. Before the revolution, Egypt welcomed around 12 million visitors annually.

This year South Africa will likely reach 9 million again, and Egypt will fall back to around 6-7 million.

That’s a lot of tourists! A lot LOT more than was expected only a few months, ago. And it’s likely a harbinger of good times to come.

On April 28 the U.S. State Department dropped its travel warning to Egypt, replacing it with a milder travel alert.

The U.S. move followed by about a month similar moves by most European countries.

Is tourism to Egypt as safe, now, as it was last year before the revolution? I think so, particularly if we speak of the main tourist areas like the Nile between Luxor and Aswan. But it’s extremely important to understand the caveat that I’m speaking of reality, not of perception. No, Egypt is not yet perceived as safe a destination by tourists as before the reveolution, even though it may, in fact, be.

But given the numbers trend, it may not be too long before that par, too, is reached.