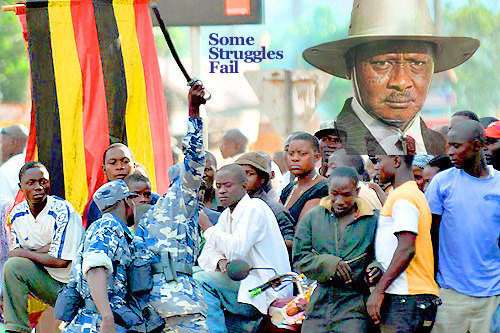 Time is running out on Uganda. Slowly drifting into dictatorial oblivion, its soul is being bled to death by its vampire ruler. Uganda is becoming the next Zimbabwe.

Zimbabwe is so exhausted it will not respond to the African Awakening. And Uganda is on the very threshold of being unable to as well. These two once beautiful places have been laid to waste by power-crazed dictators: MUgabe and MUseveni.

Understandably, the world news about Uganda is almost exclusively about the unimaginable “anti-gay” bill floating like invisible toxin in Uganda’s Parliament. For us in the tourist industry it’s a death knell. If passed, simple knowledge unreported of a gay person becomes a crime.

Casual chatter in a safari vehicle about gay friends or gay society, or god forbid, a gay customer must be reported by the driver to the police, or the driver can be imprisoned. It’s unclear what would happen to the foreign visitor.

And that’s hardly the most draconian aspect to the bill which in one form proscribes the death penalty for certain gay acts.

But I think this horrid legislation is being used as a distraction by Yoweri Museveni from the final cementing of his dictatorship, his swearing in for a 6th term as Uganda’s president.

His elaborate ceremony yesterday was replete with tumbling fighter jets that nearly crashed into the presidential stadium, out-of-tune competing bands, tens of thousands of supporters, and a remarkable list of other Heads of African States gingerly trying to avoid being photographed by the few journalists left in the country.

Museveni is now the longest ruling dictator after Robert Mugabe of Zimbabwe, who has ruled that enervated society for 31 years. Now I’m not one to believe in term limits, but give me a break.

Mugabe – who last year was allowed to travel only into the Vatican and Malaysia – arrived the swearing-in ceremony to raucous and well orchestrated jubilation before taking THE privileged seat next to Uganda’s powerless Chief Justice Odoki (who swore Museveni in), who sat next to the First Lady, who sat next to The Emperor.

Like in Zimbabwe, Museveni came to power legitimately. In fact his recent 6th election was probably fair enough that democracy technicians are required to anoint him (although by nowhere near the two-thirds he claims).

But the election campaign was not fair or democratic. The government controlled the media, imprisoned or killed opponents, dispersed demonstrations in hellish ways, and broke, tortured then temporarily exiled his main opponent, Kizza Besigye, by refusing to allow Kenya Airways flights into the country.

And while all the world bites their lip about what’s happening with the anti-gay bill in the Ugandan Parliament, the fact is that the Ugandan Parliament is becoming a pitiful and powerless entity. No journalist could figure out, today, what procedures are in play with regards to the bill. No one could even say if Parliament were over, or not.

This is because it’s Museveni pulling the strings, and he’s dangling this putrid piece of legislation to distract the world’s interest from the iron crown he just forced the Ugandan population to place on his head.

What happened in Zimbabwe is happening in Uganda. An educated, respectful population torn by recent ethnic conflicts is being manipulated into submission by a heathen dictator. It’s too late for Zimbabwe. It might be too late for Uganda.