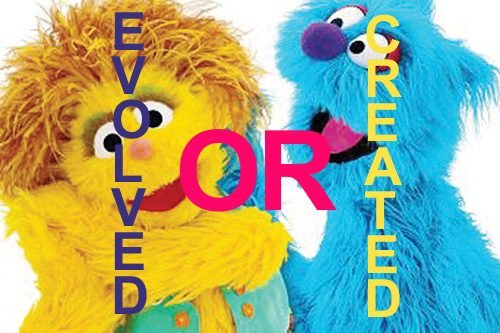 The first job I got fired from was after I reported to my Yugoslavian boss (during the Cold War) that UNESCO’s proposal for funding Sesame Street for Cuban National Television could be used for political, not only educational purposes. Guess what? USAid is now funding it for Nigerian State television.

And guess what else? Besides the Washington Post which originated the story, the only other major city media that carried it was the Kansas City Star. And Kansas is one of a handful (but growing number) of States that impede the teaching of evolution and promote creationism.

So would you please click here to sign the petition promoted by 17-year old high school student, Zack Kopplin of Baton Rouge, who is trying desperately to stop his state legislature from doing what Kansas has done. After which, I’ll put all these paragraphs into a meaningful idea.

Nearly 40 years ago when working for UNESCO in Paris, I realized that despite my liberal leaning that there were powerful tools that governments could use to attain acquiescence to almost anything. We dared not call it “brainwashing” but that was exactly what they were.

USAid is funding Sesame “Square” on Nigerian state television. There are 13 independent television stations and networks in Nigeria, but none can compete with NTA, the massive state-controlled network which unlike PBS or the BBC is a real mouthpiece for the government.

Mouthpiece. Nigeria has a lot of explaining to do, both currently and historically. And one of its most effective devices is NTA.

And now, it can develop in its children – with U.S. help – a tool for imbibing its messages.

America’s problems are manifold but I think easily reduced into this statement: we have empowered the ignorant.

The ignorant of America are wealthy, know how to spell well enough, and have developed social and political tools to lord over us infidels while flagrantly promoting contradictory ideas, and worst of all, embracing nonsense like creationism.

We can’t – we shouldn’t – outlaw ignorance. It’s our own fault. We didn’t pay the teachers in Oklahoma or Kansas, or for that matter anywhere, enough to do a good job. We created a generation of ardent believers … in nonsense.

The only skill you need to believe deeply in nonsense is how to read. Especially in today’s unreal, surreal and political contrary world.

Learning tools like literacy are not the same as acquiring analytical skills. That’s what’s lacking in America, and now possibly in the next generation of Nigerians. Masses of skilled kids will be made just literate enough to believe the nonsense of their autocratic rulers.

USAid could have funded Sesame Street in Nigeria in other ways – on competing networks clamoring for a voice in the country. But they didn’t. They propped up a corrupt and secular regime with a powerful additive: brainwashing.