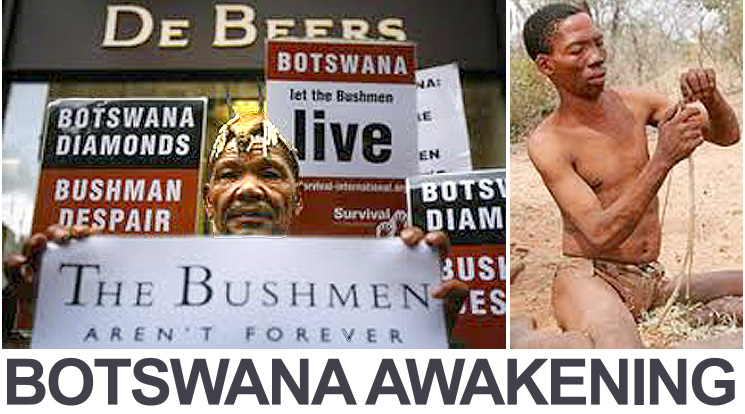 The African Awakening is unstoppable, even in Libya and Syria, and maybe coming to China after Saudi Arabia. But did you ever expect it to emerge full force in little Botswana?

Well Botswana isn’t little in terms of geographical size: about the size of Texas, but whereas Texas has about 25 million residents, Botswana has only 2 million. And Botswana is undoubtedly used by those infamous Texas high school textbooks as a model of stability.

Botswana is in the midst of a very successful national strike that among other things is closing hospitals, schools and borders. Tourists, for example, may not be able to travel overland into neighboring countries from April 18-29.

“There are different ways to take over governance, and that includes by force,” Agence France Presse reported today that the strike leader, Duma Boko, told a rally in Gaberone.

“If we can come together we can take our government as it happened in Egypt and Tunisia.”

As it happened in Egypt and Tunisia there was a lot of violence, and that won’t happen in “little Botswana.” But change will, and for Botswana it could be quite profound.

The current topic is over wages, not governance. Government jobs account for a sizeable portion of Botswana’s otherwise diverse and historically vibrant economy. The wages have been frozen for 3 years, and strike leaders are demanding a 16% wage increase just as the Botswana government must go sheepishly to the world markets increasing its public debt.

Botswana is not skilled at raising debt. Diamonds, especially, and other mining makes it one of Africa’s richest countries (in terms of GDP or percapita income.)

But the world depression hit luxury goods like diamonds very hard. The industry has been relatively slow to recover.

But the history of the current political turbulence is not strictly economic. A side issue which threatens to emerge as the most potent political outcome is the struggle by bushmen to regain control of their ancestral home in the Kalahari.

It’s a long battle whose ideological complexities are being highlighted by the current strike. In 1996, the London-based Gem Diamond Company discovered a huge streak of diamonds in the central Kalahari; in fact, inside the already proclaimed Central Kalahari Reserve, Botswana’s largest protected wilderness.

The government then leased an area to the company, in contravention of its own law, and later offered the mega tourism company, Wilderness Safaris, a lease to develop the first camp in the Kalahari, also otherwise illegal without Bushmen consent.

The Bushmen sued and prevailed in Botswana’s high court in 2006. Gem then threatened to sue the government of Botswana. Wilderness Safaris (working hard to create a good “ecotourism” image) stuck its tail between its legs and moved to another part of the giant reserve and has only sporadically operated a semi-permanent camp, there.

But the Botswana government continued to harass the Bushmen. As recently as last year the government was still trying to forcibly move out the Bushmen.

This “political” issue has gained new traction with the country’s unions and likely could be the ideological basis of bringing down Botswana’s government for the first time since its Independence from Britain in the 1960s.

This is a great story. It’s filled with ideas, not guns or commercial lies. It’s the epitome of what the African Awakening is all about: significant nonviolent political change.