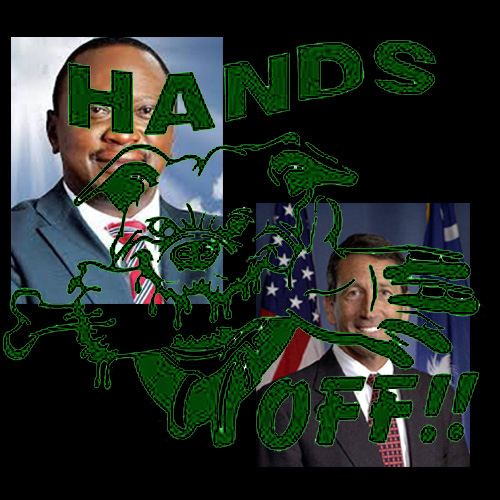 The tenacity of Rightists that so inhibits U.S. progress is becoming true worldwide, and no better example than the imminent diplomatic earthquake over Kenyan leaders’ indictment by the World Court.

The phrase is not mine, but Richard Dowden’s, one of the world’s most respected African analysts, Director of Britain’s Royal African Society.

Dowden’s brilliant summary and analysis of the Kenyan Mess published today is required reading for anyone who’s trying to understand this incredible “mess.”

And his conclusion is “Right”-on: the minority (in the world as in Kenya) who are “elite … simply do not recognize that they are subject to the law. Politically powerful, exceedingly wealthy and above the law,” people like Kenyatta, Cameron or Limbaugh just ignore legal and social realities, carving a world in their selfish images.

(Read Dowden. I do not intend to quote him out of context, and the quote above he wrote strictly with regards to the Kenyan leaders on trial, but I think it a fair if liberal extraction of his meaning.)

Dowden’s analysis is no more brilliant than his summary, which is a tough nut to crack. Before I further try to summarize Dowden you must have an understanding of the ICC (International Criminal Court) which has indicted the President and Vice-President of Kenya for crimes against humanity.

The U.S. does not recognize the ICC. Nor does China, India and 38 other countries. But the majority of the world does: 122 countries including Canada, Australia, all of South America and almost all of Europe.

Another 28 countries, including Russia, have “signed on” to the ICC Treaty while not yet ratifying it. In so doing they agree to the abide by the treaty (including arresting indicted criminals on behalf of the Treaty who are not their own citizens) without yet allowing prosecution of their own citizens.

The Court was only formed in 2002. There is a much older cousin, the International Court of Justice (ICJ) formed in 1945 and designed strictly to adjudicate disputes between countries. All countries that belong to the UN automatically accept the ICJ.

Both courts are located in The Hague and share some facilities.

In 2007 Kenya blew up after a contentious end-of-year election. About 1300 people were killed and a quarter million displaced (of which more than a 100,000 remain so). The violence threatened Kenya’s relative stability and the west’s toehold in the continent:

Kenya was and probably remains the closest African ally to both Britain and the U.S. Strategically critical to the War on Terror (especially in Somali) and to both countries’ defense posture in the Red Sea (bases and warships in Mombasa), Kenya was the platform on which democracy and western capitalism were and are being promoted by the west onto the continent as a whole.

Britain, the U.S. and recently retired UN Secretary General Kofi Annan formulated a brilliant peace agreement that after a troubling six weeks brought Kenyan society back to peace, resulted in five years of growth and stability and the creation of one of the world’s best, new constitutions.

Part of that lengthy and complicated agreement was that those responsible for the killings and massacres should be brought to trial. The agreement gave Kenya the option of running the trials itself, or if it didn’t want to, allowed the ICC to run them.

Kenya through its parliament decided to wave its right to hold the trial and agreed to cooperate with the ICC.

Lo and behold, guess what the ICC found?

That two of its rising political stars, who recently became the country’s President and Vice President, were principally responsible for the killings and massacre.

You know it’s interesting. In the old days what tangled up the west in its own ideology was its support of South American and Mideast dictators who held none of the west’s lofty morals. And these guys often used the west’s weaponry freely given them back on the west!

But now what you have is the west denying its own lofty morals!

David Cameron, Prime Minister of Britain, and Jacob Zuma, President of South Africa, both lead countries who have signed on to the ICC. President Zuma traveled to Nairobi to be an honored guest at Kenyatta’s inauguration.

This week Cameron welcomed indicted Kenyan president Uhuru Kenyatta to a conference about Somali in London.

There was local “outrage” but it didn’t seem to matter.

Today Kenyatta announced in a wildly aggressive press conference that the UN Security Council better vacate his indictment with the ICC.

Also today, Fox Newser Stephen Hayes, given a platform in U.S. News and World Report, says that the ICC should drop the charges against Kenyatta.

I think that says it all. The Right Worldwide is unified, but why? You can argue that Cameron is hamstrung by Kenya’s importance in the Somali situation, and you can argue that Zuma is crazy.

But why would Stephen Hayes take a position?

Because The Right (Kenyatta + Cameron + Zuma + Hayes, let me also add Sanford) are all miserable failures who through “elitism” and (likely unscrupulous) wealth have manipulated elections to become powerful men. And The Right does not unlock its jaw once clamped.

They are all also in minorities, but there seems to be no organized majority to defeat them.

Back to unedited Dowden:

“The fact is that the Kenyan elite … simply do not recognize that they are subject to the law. Politically powerful, exceedingly wealthy and above the law, no state official would dare touch them.”

Equally applied to miscreant U.S. bankers and right-wing U.S. politicians. How many bankers have gone to jail? Or even lost their job? Which man was yesterday elected a Congressman who is indicted for having misused public funds for his affair in South America?

Good grief. They just can’t be gotten rid of. And so what happens when Vice-President Ruto decides not to go to The Hague for his trial on May 28, or when President Kenyatta decides to take a pass on his date of July 9?