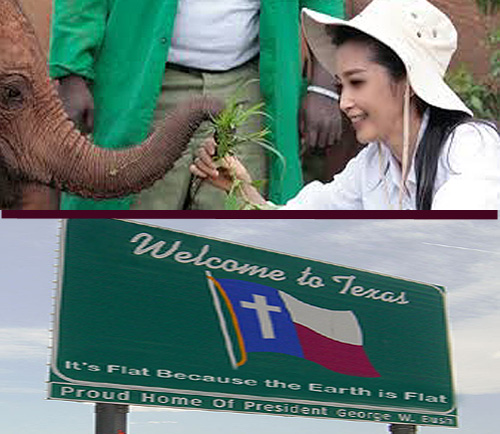 It’s likely there is a greater percentage of Chinese who wish to end the ivory trade and save elephants than there are Texans who believe in evolution.

Think about that, please.

Yesterday, the Chinese actress Li Bingbing – who has 20 million followers and counting on her social media – made a highly public visit to an elephant orphanage in Nairobi and then called on her fellow Chinese to stop buying ivory.

She joins a growing list of Chinese celebrities aggressively supporting conservation issues, and it makes me so damn mad the way current media again and again is blaming the Chinese for a crisis they’ve also made up: elephant decline.

The same organization for which Bingbing is an honorary ambassador is also one of the few to use realistic numbers regarding elephants. You might have heard of this organization: the United Nations.

The press statement released with Bingbing’s conference referred to “data [that] shows that 17,000 elephants were illegally killed in 2011.”

Contrast that with CNN that described the “slaughter of elephants” at an “alarming rate” and blamed it on the Chinese.

As I’ve pointed out again and again in this blog, animal poaching is horrible. Using the UN’s numbers (see link to the report, below) there are probably a half million or more elephant in Africa, today, and a low estimate of their annual reproductive rate increases that population automatically by 25-35,000 annually.

There are too many elephant. Elephant/human conflict is Africa’s single-largest conservation problem. So even with the illegal poaching, the troublesome population is growing larger and larger every year.

And the notion that it is all due to the Chinese is racist.

Yes, most of the illegal ivory goes to Asia, but Asia is not China. There is huge market in Thailand almost equal to all of China, and another huge market in South Korea. Anyone ever talk about those countries? And a huge portion of the Chinese market comes in through Hong Kong, which is as little Chinese as possible. The next conduits are Indonesia and the Philippines.

But do we ever hear negative things about those capitalist ally mean guys?

This whole made-up story about the imminent doom of elephants is horrible enough in itself. The elephant problem is not with its likely demise, but with the demise of our entire conservation efforts in Africa as young populations of modern Africans get sick and tired of being stepped on by animals preserved for rich foreigners.

Go ahead and let the beast bulldoze your child’s primary school at night and decimate your watermelon crop, so that South African tourism chains can charge $800 per American per night to see them picking their teeth and wagging their tails the next morning.

Look folks, we’ve got to climb down from inaccurate media that’s turning real world conflicts into soap operas. I’m so exasperated not just with CNN, but a whole range of media, each one feeding on the American public’s craven need for apocalypse.

The best factual report about the elephant situation you can read by clicking here. Be patient and refresh your viewer often, because it’s a huge report with many charts and tables and it’s created for CITES by CITES and the UN. Unfortunately it’s skewed towards the apocalyptic angle, for political reasons anticipating the upcoming CITES battle about sales of regulated ivory. But its numbers are solid and absolutely support my ranting and raving.

It’s a real problem, but we aren’t thinking about it correctly or working to resolve it. We’re just using it to titillate us.

Get real. Thank you, Bingbing and UN.