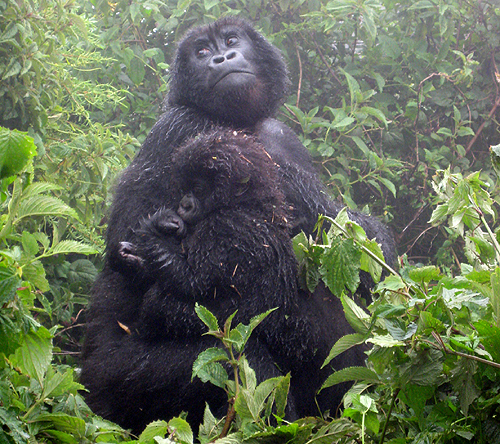 Anthropomorphization of African animals is one of my pet peeves, but it’s Mother’s Day for god’s sake! Here is my best attempt at doing exactly what I don’t think anyone should!

The Mother of Mother’s has got to be the elephant, because from the moment of puberty to the moment of death this poor sop is pregnant and nursing. Elephant are one of the few mammals that can lactate while pregnant or in estrus.

So the moment she emerges from childhood … it’s over, that’s it. No more fun and games. 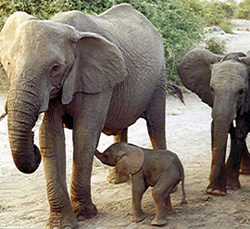 No nicotine breaks. No awards banquets: after all she never retires. No vacations, no birthday parties except for her unending own deliveries and no chance for getting over to the TJMax sale to celebrate the end of stretch marks, because she’s always pregnant.

From about 12 to 65 years old, and then finally it’s over. Completely over. She’s dead. She’s not a mom, then a soccer coach then a board member then a grandmom, because she’s just always a mom. Until she’s a corpse.

Elephant are…
The Queen Mother.

The other two biggest Moms are rhino and hippo. Rhino might never be moms, because they fight off like the dickens every suitor that comes along. Perhaps they understand the outcome if they don’t. 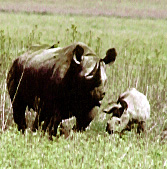 A real rhino loser will be pregnant about every seven years: not bad. And as she gets older and bigger (and wiser?) she gets stronger and stronger and will probably kill any guy who tries to get near her. Some poorly trained researchers think she’s protecting the kid, but I know she could care less.

Hippo, on the other hand, are absolute ditzes. Eh, pregnant? So what? Hippo forget they’re pregnant and birth under water where the poor infant nearly drowns before finally bubbling up to the light of day.

Then, overcome by guilt and apprehension, the mother starts protecting the infant like the crown jewels .. for a short while. But sometimes she smothers it: of course accidentally it’s just that it’s so tiny, easily under 200 pounds. Then, pretty soon she forgets she’s got it and they both wander back into the unscrupulous pod of blubber of dozens of similar creatures hating and fighting with one another.

Moving up the ladder of cognitive grazing we come to those who prefer ruminating to birthing.

Unlike the big moms, this group has a pretty well defined cycle of pregnancy and birthing and mom responsibilities, but the problem is that it, too, never ends. But unlike the Queen of Mothers, they get several months respite every year, then the whole damn cycle starts over!

They’re feeling pretty good having dumped the teenagers, maybe go out with a few other ladies for a quick afternoon cocktail, and who’s there but Jolly Joe. Just a bit tipsy (can’t deny them the brief interlude from a life filled with dire responsibilities) they take a quick fling, then what d’ya know, they’re all pregnant, again.

And so it goes. For the rest of their lives, which fortunately aren’t as long as the elephant’s. Then when the newest junior comes along, he’d better keep up or it’s over. A little zebra colt or wildebeest calve that loses its mother has basically lost its life.

You can darn well bet the house that no other zebra or wildebeest is going to take care of that irresponsible little twirp. He got lost, that’s his problem. Mom gives an effort at searching the playgrounds, but not for long. I mean, golly, can’t a girl have some time to herself?

Wildebeest and zebra are ..
Floozie Moms.

Then there’s the giraffe, the enigmatic ponderous long-necked thing. How can you expect something whose eyes are so far from the ground to put anything as small as a child into focus?

The poor thing drops 6 feet into the world to begin with and there’s no way she can pick it up: it’s too far away. Fortunately, the amount she can bend and the length of her tongue are capable of tasting it to make sure it’s real, but after it’s up, and she lifts her head up into the sky, again, well, it’s basically forgotten.

So if that little critter needs a drink she better stay close. More than once I’ve seen a mother giraffe abandon her offspring for the slightest fright: like one of my improperly dressed clients who didn’t realize there were no hair dryers. Fortunately for the little tyke it can start eating after only a couple months, because you can be darn sure mom’s not going to serve breakfast.

Then we have those considered to be the kings of jungle: the cats. The problem with cats is that they’re like rabbits. They like to be pregnant.

Problem with lion is that evolution lagged their personalities. The poor lion mother has only four tits but gives birth to 5-7 cubs virtually every year, with glee I might add. And she keeps smiling as 3-4 are immediately starved out!

Cheetah, on the other hand, are real workhorses. There’s this one female cheetah around Ndutu which has successfully raised 5 or 6 cubs over several consecutive years. (See Mary Critchlow’s wonderful picture at the bottom of this blog.)

This is astounding, particularly when you realize that the cubs – unlike other cats – have to follow mom a day after being born. No den for these young’uns! Get ‘um up and working!

Alas to our own neck of the woods. At this point my distaste for talking about animals as people breaks down a little. But only a little!


Baboons are bothersome at all stages of life. And the incredible tolerance the mothers have for the constantly misbehaving kids is amazing. And do they ever misbehave! My wife and I raised a baby baboon when we lived in Kenya, so I know personally. One little baboon could lay waste an entire African village.

As they grow up they’re absolutely incapable of shedding this cavalier attitude towards the possibility of Utopia. And they tolerate and foster it among one another. So Mom will most happily provide carriage for even the most malevolent little devil.

And then those big chumps in the woods. Gosh it’s hard not to compare one of them to my brother. Everything is so similar to us: the way they cuddle and fight and play. Play seems to be the thing. I know lots of animals look like they’re playing, but I don’t think so. They’re just running around.


Gorillas play. Sometimes with the tourists or researchers watching them, and once a big silverback Daddy who didn’t like this cross cultural interaction came charging out of the forest like a freight train and swung the kid beside me up into the air with his huge arm even as he was running, and the kid nearly went into orbit.

Mom screamed. I couldn’t tell if it was out of fear or anger, or both, as she scrambled up the tree and pulled junior into her breast.

So there you have it. My first foray into the absurd, unlikely and totally unrealistic universe of animals that don’t exist. But then when younger, we often held that view of our own moms.