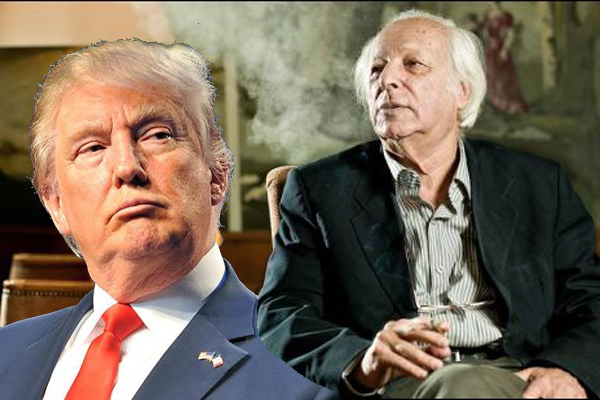 Trump’s America is just like many other world power centers, and Africa’s dean of communism sees this as the wonderful start of an irreversible change. According to Samir Amin, you can throw out the Democratic Party with the Republicans; in fact, America as we’ve known it for 2½ centuries is over.

Listen to the old man. Marxism and communism still carry components that could be helpful to us today, just like there are good components in both contemporary conservative and liberal ideologies. Just beware. These are troubled times, but they are also very new and unprecedented times.

I’ve never accepted wholesale Egypt’s, France’s, Mali’s dean of communism. Now in his mid-eighties this exceptional thinker is nonetheless rooted in the past. His social theories evolved and I believe are limited by the earlier times in which he formed his ideas.

Samir Amin was born an Egyptian with one French parent. He lived and worked much of his life in north Africa and his experience with one foot in Africa and one in Europe is an extraordinary and uniquely valuable one.

As a die-hard Marxist, he currently revels in the Trump victory:

“Trump’s victory signals the inevitable implosion of the liberal order,” is the tagline to his lengthy article in today’s Pambazuka News.

We want any explosion/implosion to be fast and anxiously wait to savor the victorious wafts of sulphur that tell us the fireworks are over. Amin warns us this is fantasy and urges us to hunker down for the long haul. What’s happening is just the start: it’s irreversible, but the end won’t come soon and this “gives our epoch a dramatic tone bearing the gravest dangers.”

He’s so right. People like me who are so incredibly impatient, so spinally linked to the electronic movement of ideas, are apt to feel enormous frustration.

Unless we control that frustration we’re likely to make some profoundly wrong moves as we get sucked into the maelstrom. Some things were right before, and they’re right now and they will be in the new dawn, too.

“The power of Donald Trump falls into [the] category of false criticism of liberal globalization.”

I just love Marxism: it’s so convoluted! Any time I can invoke dialectic materialism I know I’m immune to rebuttal! But what Amin is trying to say in clear-speak is that Trump rallied the troops by harnessing their real and correct displeasure with the system (‘liberal globalization’), but that Trump doesn’t really believe that at all.

So interestingly (and maybe dialectically?), Amin remains uncertain about how Trump will actually behave. Amin asks the same questions as Sean Hannity: will he or won’t he? Is he motivated by those who elected him, or does he believe he can control their thinking? We don’t know yet.

Amin does want Trump to do certain things, because doing those things will hasten the end of the epoch. He hopes, for example, that Trump will ally more closely with Russia, not because Amin particularly likes Russia but because that’s likely to bring a period of global stability that will allow socialist principles to prosper.

He hopes Trump will reverse trade agreements but “Will Trump go so far as to repeal NAFTA?” he asks with benign uncertainty because “it’s unlikely that the vast majority of Republican and Democrats… all of whom have won unconditional support of the interests of the American oligarchies, will allow Trump to go that far.”

So if Amin’s right about what’s happening, what comes next?

As an old Marxist Amin is certain it could be socialist near utopia, as much as an old Methodist thinks it will be heaven. He thinks Sanders is the glimmer of proof:

“Sanders’ election campaign had given rise to much hope. By daring to introduce a socialist perspective into the debate, Sanders initiated the sound politicization of public opinion.”

But then like an old Tolstoy in hiding he adds:

“ We can only deplore, under these conditions, the capitulation of Sanders and his rallying to the support of Clinton.”

There’s a lot more to Samir Amin than this short summary of one article he wrote today. He’s been a veritable one-man think tank. He’s old and some of his ideas are worn and incorrect. But today he counsels vigilance and patience and begins the eulogy of an epoch.

Of that, he’s right.