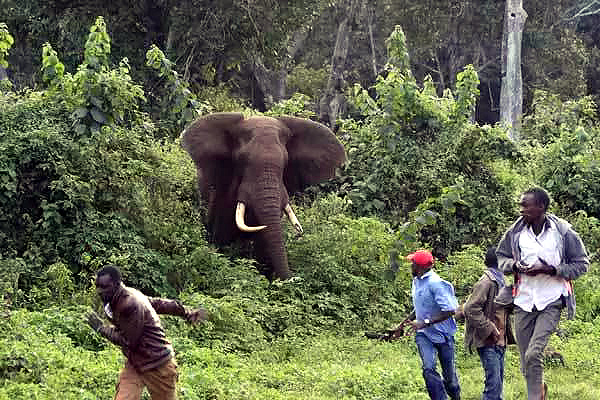 World authorities were unable last week to adequately address the “elephant problem” at COP17 even as more and more elephant attacks are reported.

Conservationists focus on saving elephants from further population declines, but you can’t save anything that large and powerful if you don’t first protect the human beings that they threaten.

A father of eight returning from a medical dispensary to his farming village in north central Kenya was viciously attacked recently by an elephant. It was 6 pm and he was walking on a well used path with heavy bushes on either side when the elephant attacked. It was not an animal reserve at all, but a farming community. The nearest animal reserve was about eight miles away, the Kerio Valley.

When he screamed and shouted, other villagers came to help him and they report there were “at least a hundred” elephant there in their community. Even considering likely exaggeration, clearly there were more than a few elephant quite a ways outside “their home.”

According to the Great Elephant Census and the IUCN follow-up the elephants in northern Tanzania and Kenya are doing well. Some of us believe … too well. Not only is the existing population sustaining itself, but it’s growing quite fast. It’s immediately important to point out this is not the case in much of the rest of Africa.

The result of this growth of the behemoth is that people like the Chiptigit villager are being killed, and much more often, harassed and constantly threatened. Imagine trying to take care of a small group of cows and goats, or to tend a vegetable garden not as a hobby but as near sustenance, and then have dozens of elephant come through.

It’s not only villagers, either.

A famous South African conservationist working not too far from Chiptigit was attacked in June for seemingly no reason. He lived to tell a horrifying story. “I never expected to see an elephant attack a human,” and then one attacked him.

Ian Redmond believes the elephant aggression was caused by charcoal kilns operating illegally in the animal reserve and by poachers. It’s interesting, though, that whether it’s illegal or not for an elephant to attack a Chiptigit villager – far from its reserve – nothing can be done about it.

Moreover, I think the jump to the conclusion that it was human misdeeds that caused the elephant aggression is a stretch. How about this: There are too many elephant.

In Uganda an elephant ran into a bus on one of the country’s main highways killing three people before dying itself in June. That’s “highway” not wilderness path.

Last month an Italian tourist staying at a reputable camp in Kenya walked just a few feet outside the camp perimeter to photograph elephant and was killed by one.

In Mozambique a South African tourist posted a terrifying video in July of an elephant attacking him. Multiple videos are posted literally every month of elephant attacks in Kruger National Park and surrounding reserves, one of the best managed big game areas on earth.

So it’s not just a shame but counter productive that conservationists don’t address efforts to (a) protect communities from elephant aggression and (b) recognize that there’s a social balance as well as a natural balance, and that social balance in my view is being massively ignored.

Tomorrow I’ll review COP17 which ended in Johannesburg recently in preparation for the great CITES convention. It doesn’t look good for elephants as far as COP17 is concerned:

Consideration of the people who are most effected – who are not the tourists – was virtually ignored.