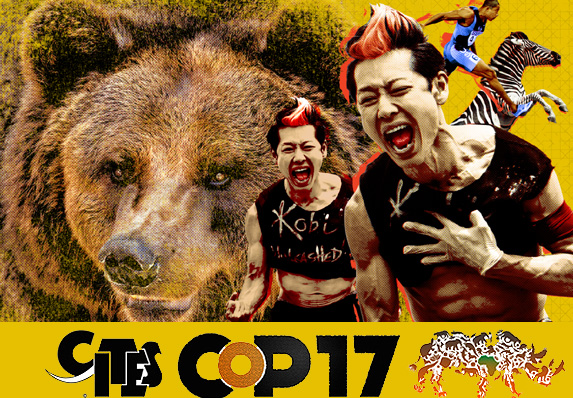 COP17 adjourned a day early in Joburg as a Cop Out. No action was taken to protect lions. No further protections were given elephant and an attempt to integrate local communities into the CITES process was essentially rebuked.

These three failures are shameful.

So why all the self-congratulations?

My overall impression is that CITES is turning into an Old Boys Club, prepared to so massively reenforce the status quo that any real initiatives become increasingly unlikely.

“COP” is the experts’ preparatory meeting that essentially makes all the decisions for diplomats who meet later as CITES. They determine what animals may be globally traded, dead and/or alive. Politics influences both meetings, of course, but COP is supposed to be more scientific than political.

CITES was so successful banning the trade of ivory in the 1980s that it saved elephants. A string of other successes with cheetah, leopard, rhino, Amazon forests, many birds and snakes and now hopefully, sharks truly gives credibility to the view it’s the most successful world treaty ever created.

Last week in Johannesburg the 2,500 COP delegates promulgated global trade regulations for more than 5,600 animals and 30,000 plants, many of which would likely not survive without this attention. The problem is that these numbers have not changed much over the last decade despite the clear acceleration of climate change and global conflict.

There were some accomplishments: Long neglected action on the grey parrot, helmeted hornbill and pangolin. The conference flirted with the idea of giving itself much more power to regulate illegal trade within individual countries but retracted into a non-binding consensus regarding domestic ivory trading.

But overall it was less than lackluster. CITES seems to be settling into an institution more interested in its own preservation than the species under its auspices. The deliberations over elephants and lions tell the tale:

Statistics prove that lions are in much more trouble than elephants: as much as a third of the population has been lost in a decade. But COP17 rejected any new protections for lion and even agreed to allow South African to farm and harvest lion bones for the Asian market.

This is a travesty of the most alarming sort, and the world’s NRA is correct when it claims “Safari Club International Saves Lion … from CITIES Ban.”

Lion are so important to hunters, circuses and even private large pet owners worldwide, that COP17 probably knew there was no way CITES delegates would accept any restriction on the lion trade. This reveals how political if sycophantic this once academic almost arcane keeper of the earth has become.

The battle was shaken up a bit when Botswana peeled away from the southern coalition and actually supported more aggressive measures to further restrict ivory sales. Led by the U.S. many qualifications to the ban on ivory trade in places like Namibia were ended but basically nothing truly new was proposed.

This either undermines the substance or reveals the hoopla about elephant extinction that the Great Elephant Census and subsequent attention brought us this summer. I tend to believe the latter but I remain disturbed by COP17’s attempts then brazen failures with regards to elephants.

The greatest travesty was that while COP17 acknowledged that today’s threatened extinctions are massively linked to human development, virtually nothing was done to address this.

Brazil proposed an aggressive protocol that would bind CITES nations to a yet-to-be-determined involvement with their local communities. It was cosponsored by Namibia, supported by Zambia and other countries and obtained the support of China.

But normally powerful defenders of aboriginal cultures, including Canada and Japan, balked – afraid that the direction of the protocol would ultimately dilute existing prohibitions on international trade.

Indeed that could be the ulterior motive. As Kenyan villagers who suffer from elephant attacks would love to have them killed rendering ivory that would be waiting to be marketed, Brazilian farmers in Amazon forests and Chinese antique dealers might be salivating for any softening of current CITES tariffs.

But nothing was proposed as an alternative and the effort was exiled into a working group.

So protect elephants, but also protect – compensate, build, reeducate – the villagers who suffer. List lions as endangered, because guess what, they are. Are these such difficult ideas? Are lobbyists like Safari Club International now as influential globally as the NRA is domestically?