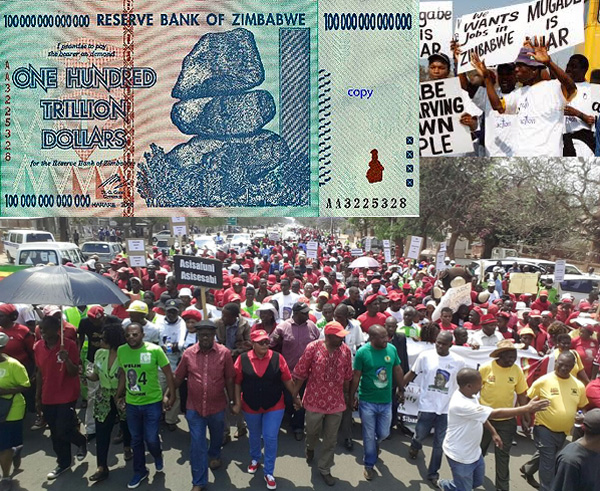 Unending protests continue in Ethiopia, South Africa and Zimbabwe, and though unique issues power each country’s turmoil, the fundamental driver is economic.

South Africa and Ethiopia are both experiencing healthy growth despite the protests, while Zimbabwe is tanking. Excluding Zim’s recent plunge, all three countries were performing very much like the U.S. over the last 4-5 years: modest but steady growth and improved employment. So what’s going on?

Zimbabwe protests are nothing new. They have continued virtually unabated for ten years, although not at the crisis levels of the last several months. But until recently it’s been mostly political protest, anger with the aging dictator, Robert Mugabe, and his refusal to broaden the government to include opposition politicians.

Last year the country’s always poor economy started to collapse. Protests widened over taxes and tariffs, something rather arcane to a street protest. It all then blew apart when the government announced it was abandoning the U.S. dollar as its currency and would begin printing its own money, again.

This is insanity and every half-educated Zimbabwean knows it. It was what sparked the most violent protests the country has seen that continue now nearly every day.

In Ethiopia the majority tribes have long been ruled by the minority Tigrean tribe in a dynamic not dissimilar to the Watutsis overlording the Hutus in Rwanda. Like Rwanda, the country’s economic statistics look very good, out performing most of the rest of Africa.

Until this year. The current regime has been in power for more than a decade and so will logically take the blame for the economic downturn. The government’s response has been to exercise even further control of the market and the break point came recently when the government announced it was confiscating smaller farms in order to consolidate them as larger, state-controlled businesses.

South Africa’s student protests have now gone on for more than a year. Some major universities have been closed almost that entire time. The initial issue remains central: school fees are too high, but that central issue has grown into a more ambitious one that all higher education be free.

South Africa is the continent’s second largest economy after Nigeria, and like Nigeria is suffering from falling prices for natural resources. (In Nigeria’s case that’s oil; in South Africa’s it’s coal, gold and other minerals.)

That phrase so prevalent during political campaigns rings truer than ever in Africa, today. Each of the three countries today face political instability really and simply because their economies are not doing well enough. Very similar stories could be told about a score of other African countries as well.

Moralists may feel enchanted that bad economies highlight all the worst policies of existing societies, and that’s true. Zimbabwe should get rid of Mugabe. Ethiopia should grant greater liberties to the Oromo and Amharic. South Africa should move much more swiftly in resolving the student debt issue.

But even if all those central issues were somehow resolved well enough to satisfy the protestors, it wouldn’t stop the political turbulence. No better example of this exists than the South African student protests, because their initial demand to lower fees was accepted by the government rather quickly and expeditiously almost a year ago.

Then, suddenly, it wasn’t enough. That would now be likely true if Mugabe died and the Oromo got true democratic representation.

The problem is deeper and these are but the symptoms. Aspirin doesn’t cure the flu.