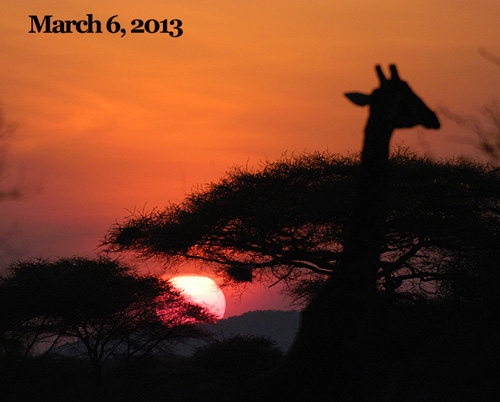 The cycle closes: 11 months from today we’ll know if Kenya has been reborn strong, free and welcoming; or if this potential jewel of Africa has fissured irreparably.

March 4, 2013, is the date set for the next Kenyan election. It will be the first national election since December, 2007, when widespread mayhem caused a near revolution with more than 1200 people killed and as many as a quarter million refugees, many who remain unsettled, today.

I believe the sun will rise on Monday, March 6, over a peaceful, prosperous Kenya. The social and physical construction that is so widespread throughout the country, especially its remarkably near-perfect constitution, bodes optimism.

But Kenya isn’t out of the woods, yet. Yesterday, an actual minister in the Kenyan government was arrested for “inciting violence.”

He was protesting the demolition of slum housing in his constituency to make way for Nairobi’s airport expansion. The controversy is part and parcel to the ideological arguments that exploded in the December, 2007, elections: essentially, rich versus poor.

And the named instigators of the December, 2007, violence – which include prominent members of the current government – are scheduled for trial in The Hague almost at exactly the same time as the national election.

Irony of ironies — unbelievable if you don’t follow Kenyan politics — two of the accused say they will be contestants in the presidential election! If they do stand for election, and if their candidacy gains momentum, they may balk the Hague proceedings and all hell could turn loose in Kenya.

As a businessman and trustee of foreigners’ vacations, I won’t send people back to Kenya until the election is over and judged successful and peaceful. But this isn’t just because of significant conundrums in Kenya’s politics. It’s also because of the Kenyan invasion of Somali.

That has led to multiple tourist incidents, including kidnapings and killings, perpetrated by Somali’s al-Shabaab in retaliation for the military action, and by plain old criminals unleashed by redeployment of Kenya’s small security apparatus to the Somali border out of wild and wooly areas like Samburu and Shaba.

The Kenyan invasion went better than I predicted. I admitted as much in this blog. Not everyone concurs, but even those who portend troubled times for Kenya as a result of the continuing occupation can’t ignore many positive facts happening on the ground right now.

Societies often prosper during their wars, but tourism will not. Vacations are after all, vacations; few have principal motivations based on politics. R&R does not include enhanced security at your beach resort.

But if the annoying al-Shabaab attacks in Nairobi and elsewhere cease as the situation in Somalia improves, and if the March 4 election comes off well, then it will be time to return to Kenya.

I expect both. But beware, Kenya. This could be your last chance. There might not be another countdown to peace and prosperity.