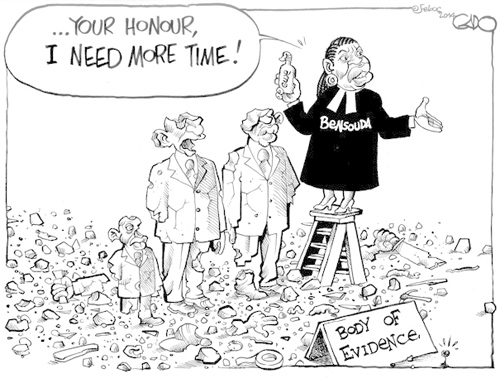 A year from now, the Kikuyus will once again rule the Kalenjins.

It’s hard to connect the obvious dots in this story without massive restraint. The alliance of the current president’s and vice president’s tribes that now rules Kenya, an historic burying of bloody hatchets, is on the surface nothing less than a society maturing and rising above petty politics and racism.

President Kenyatta is Kikuyu. Vice President Ruto is Kalenjin. There are 43 tribes in Kenya and most hate everyone else, but there are few Hatfield/McCoy gun rivalries as great as the Kikuyu/Kalenjin. I can’t think of a good analogy to America, but something like a Elizabeth Warren/Liz Cheney alliance.

1300 people were killed but even more notable, nearly a quarter million were displaced. The genocide would have been much worse if the outside world hadn’t quickly stepped in. The settlement forced on Kenya by the recently retired UN Secretary General, African Kofi Annan, was a triumph of international diplomacy.

Part of the complex, tedious settlement included determining the masterminds of the violence and punishing them. As if they weren’t known, and that was the problem: Everyone knew the masterminds: William Ruto and Uhuru Kenyatta.

But shortly after the settlement brought peace and prosperity to Kenya, many especially educated Kenyans were ready to move on beyond racism and fear. A commission was created by Kenyans to investigate the violence.

The Waki Commission was impressive. Drawing on the most prominent professionals in the country, it determined by volumes of evidence who was to blame (no surprises) and suggested they be prosecuted. But its tome of evidence and accusations were sealed by law until Parliament created a judicial process for proceeding.

Parliament couldn’t. Twice it defeated legislation to create the tribunals. Time was passing. The horror of the violence was receding from those in power and the quarter million displaced persons were being swept into the dustbin of history.

So by default in the Annan agreement, justice fell out of Kenya into The Netherlands. The World Criminal Court (ICC) was now mandated with the investigation and trial.

It was a singular disappointment for the African mastermind of the settlement: “Politicians hungry for power have long exploited Kenya’s ethnic divisions with impunity,” Annan wrote in the New York Times. Annan knew exactly what wasn’t going to happen.

The ICC had to fight tooth and nail just to get the details in the Waki Commission, and absent of much of its evidence began its own investigation in Kenya.

The chief ICC investigator, Moreno Ocampo, was an Argentinian well experienced in dealing with the big guys. He was the lead prosecutor of the Argentinian generals who had devastated his own country in the horrible post-Peron era.

After five years of investigations and the unbelievably expensive collection of evidence, the trial began in The Hague last year. Witnesses were whisked and hidden in secret places in the world to protect them. The indictments included Uhuru Kenyatta and William Ruto.

So far so good? Not exactly. In typical Machiavellian fashion the two kings of the arch enemy tribes struck an alliance against … against what? Against justice.

They ran on the same ticket for President and Vice President. And they won. The country of Kenya freely elected as its leaders the very people who had murdered and displaced them.

Speaking out for the first time since term limits forced him to retire last year, Ocampo told Radio Netherlands recently:

“Kenyatta and Ruto were allegedly killing each other, their groups, and then they were smart. They made an alliance and they presented themselves as the reconciliation process.”

Ocampo is depressed that justice as such will now never be served. But he is realistic, too, and he believes that the role he played forced a reconciliation between two leaders who would never have dared to sit in the same room together, before.

But now, there’s a new twist.

For some reason – who could possibly concoct why – the ICC’s witnesses against Kenyatta have all started to disappear. The reason given is that they have withdrawn their stories. The real reason is as Ocampo knows, “… the defence has the right to know them. And after that, it’s much more difficult because they can go to see them in London or wherever they are. And people can threaten their families.”

Kenyatta has the power of the Kenyan government to go anywhere he wants. Ruto as unpowerful as vice presidents everywhere, doesn’t.

But the cast against Ruto proceeds.