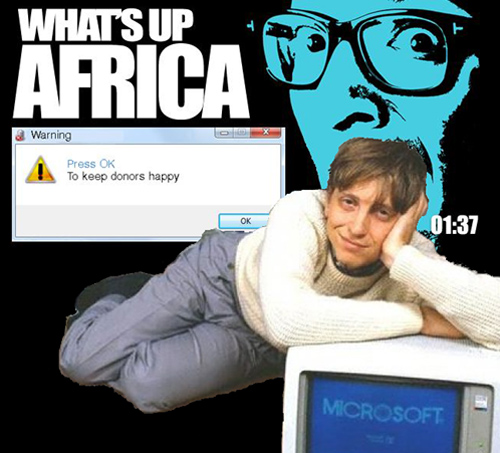 Bill Gates is a very nice man captured in the last century, and his remarkable generosity grossly misses the mark.

The two, of course, are interconnected. Throughout the world the level of malaria infection is inversely proportional to personal income. I don’t think, though, that this fact drove the Gates Foundation’s mission development.

Gates and most of the world charities tackle problems as crises to the exclusion of remedying the fundamentals.

Don’t get me wrong. It isn’t as if these generous folks make crises out of situations in order to be good philanthropists. Malaria on an individual level is a distinct crisis. Hunger caused by extreme poverty has an immediate simple remedy when dealt with as a crisis: dinner.

But the problem with Gates and most of the world’s charities is that despite how rich they may be, they aren’t rich enough to tackle the fundamentals, and so they default to actions that deal with incidental crises.

Malaria is the perfect example.

Malaria was eradicated from most of the developing world without drugs or bednets. My own Chicago’s Fullerton marsh was a cesspool of malaria right until the great fire of the 1860s.

After the fire and a growing awareness that government had to step up, malaria was systematically eradicated from Chicago by an exponential increase in public expenditures that started with increased urban hygiene (better sewers and drainage) and radical use of crude oil to suffocate marshes.

Even at that time suffocating marshes was an ecological controversy, but the power of the public domain was much greater then than now. The majority ruled.

By the early 20th century, there was no malaria in Chicago. An early NIH study of the eradication found a number of additional socially progressive policies kept malaria from returning to large urban areas like Chicago, such as banning child labor.

By the 1930s malaria in the U.S. was confined to 13 poor, southeastern states that did not have the tax base to successfully eradicate the disease. So government came to the rescue.

The 1947 National Malaria Eradication campaign moved money from the rich industrialized northeast to eradicate malaria in the south, and was successful in doing so in less than a decade.

I suspect similar stories exist throughout the developed world. And the solutions employed then would work today in Kenya or Indonesia. But destruction of the environment (oiling marshes and later, using DDT) is no longer considered a tit-for-tat that might balance in the long run, and modernizing Nairobi’s sewage system is too expensive for even the Gates Foundation.

That example is a bit oversimplified, since in fact the Gates Foundation probably does have both the capital and wherewithal to modernize (at least once) the Nairobi sewage system. What I really mean, of course, is to effect a modernization and cleanliness that like in late 19th century Chicago was achieved by modernization of a public service.

Today Nairobi is exponentially bigger than Chicago was in 1860, and Nairobi is affected physiologically by what happens in Mombasa, Addis, Kampala and Dar, so fixing Nairobi without simultaneously fixing those other great metropolises would be problematic with regards to eradicating malaria.

BUT (and this is a very big but) so is the world’s wealth exponentially bigger today than in 1860, and that’s the point.

Were the public interest as dominant today as it was in Chicago in 1860, Nairobi, Mombasa, Addis, Kampala and Dar would be free of malaria, because the rich world would have fixed their sewer systems… (and of course, a lot more).

What has changed in the last 150 years is a disproportional amount of wealth has become concentrated among a few afraid it will be taken from them. There are not enough people in that pool of the paranoid very wealthy for any truly democratic or benevolent change to take place.

That isn’t to say that a majority of rich people, among which I’m sure Bill Gates is one, are not generous and intelligent enough to ante up. In this year’s letter, Gates castigates Americans for their paltry $30 annually that the U.S. provides in world aid.

But the power brokers within that pool are not the Gates of the world. They’re the Koch’s of the world. And the Koch’s rule. So long as there are Koch’s there will not be more than $30 annually per American spent on world aid.

Gates. Deal with a problem as a crisis and not a fundamental, and that’s precisely what’s happened with malaria.

The vaccine is about 60% efficacious. Not bad but incapable of eradicating malaria. It took about 30 years and billions of dollars to develop this. The beneficiaries are not exclusively people saved from malaria. It will probably in equal measure make the rich, richer.

(Note this cynical observation: If there were a vaccine that could eradicate malaria, that could be a big downer for the investors who paid to develop the vaccine.)

When the world won’t step up, when your own government or township won’t tax enough to fix fundamental problems, we have no choice: Gates and GSK become our only hope and it’s a very momentary, transitory solution that’s provided: a stop-gap.

And the powerful in the pool of the wealthy then distort those efforts to suggest they are successful in terms that claim governments can’t be.

And the cycle of mythology is perpetuated. Gates recognizes this. His annual letter is built on a series of “myths.”

I prefer a Warren Buffet to a Bill Gates. Frankly, I don’t prefer either of them in theory. There should not be super rich.

But Buffet often focuses on the fundamentals. Gates is an engineer. Or as a brilliant Dutch satirist pointed out this week, Gates treats aid like he treats Microsoft: self-perpetuating and growing and never completely tackling the problem holistically.