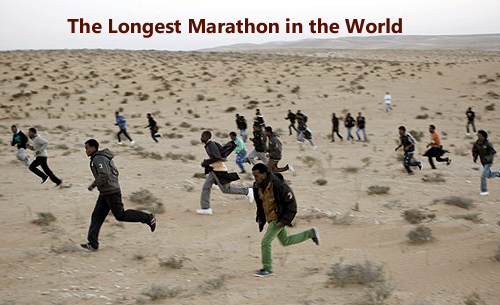 The cancerous conservatism and nationalism pumping through the developed world is slamming African refugees hard. Israel may be their last hope.

The Swiss example this weekend is only the latest example. Despite heroic European political leaders trying to open the welcome gates to the new flood of refugees, the electorates are shouting back: get rid of the colored!

The best microcosm of this global phenomenon is in Israel. Few countries implement the necessary safeguards and support for refugees as are enshrined in the Israeli constitution.

Giant caveat: Palestinians aren’t considered refugees – however they end up in Israel – and that remarkable hypocrisy if not hyperbole shows how schizophrenic the Jewish state is.

But excise that bit of nonsense and Israel’s constitution and constant judicial reaffirmation of it guarantee that a refugee who arrives and is not a Palestinian will be cared for. At least until now.

Between 50-60,000 African refugees currently reside in Israel as “illegals” but with considerable state support. Treated much better, for example, than they would be in refugee camps operated by the United Nations, they are given housing, living allowances and schooling.

The majority of these non-Palestinian Africans are smuggled in from Egypt where the potential fugitive from home pays as much if not more than Latinos coming into Arizona and Texas from Mexico.

According to the New York Times, 90 percent of these come from Eritrea or The Sudan.

Except for Syria, whose refugees can much more easily go to Turkey or another closer European country, The Sudan has produced more refugees annually than any other country in the world and for a long time.

Israel’s very active if under-the-table involvement in The Sudan for the last 30 years has likely caused many of the nationals to flee. Many of the weapons in Sudan’s multiple and bloody civil wars have been supplied by Israel.

As one analyst put it, “the chickens are coming home to roost.”

Be that as it may, for the first decade of this century African immigrants coming from The Sudan and Eritrea, Libya and even Egypt have been not only cared for but actually welcomed by most Israelis. The growing conflict with the Palestinians shrunk Israel’s manual labor work force. As in America, these persons of color were needed for menial jobs.

But the wave of anti-immigration flowing across Europe has moved south into Israel. Twice in the last year alone, the Israeli Supreme Court has had to strike down the Knesset’s moves to restrict refugee assistance.

The latest move by Israel is to erect refugee camps modeled after those commonly operated by the UN throughut the rest of the world.

Located in the Negev desert – atypically removed from the populace of the country which is technically the host – refugees are contained in fenced encampments.

This is very different from Israel’s past policy of open house and social integration.

Struck down once by the Israeli Supreme Court, the country has moved to lower the height of the fences and add a few services, and is trying to build the camp, again.

Other methods being used include paying refugees handsomely to return home, but that’s finding an obstacle in the market dynamics. You have to pay a Sudanese an awful lot to return to Darfur.

“The Israelis do not want to forcibly deport the “infiltrators,” as they are called here,” the Washington Post wrote recently, but “Nor do they want them to stay.”

Deportation which would be used by most other countries in this situation of growing citizen complaints is usually not an option for Israel. The countries to which deportation applies – the home country – won’t take anything from Israel, least of all citizens it refers to as spies and traitors.

In this nether-nether world between wanting to get rid of a growing number of “infiltrators” before right-wing Israelis start vigilante action, and upholding their idealistic constitution, and possibly wearing the guilt on their sleeves that they are responsible for the situation in the first place … Israelis are in one of the most difficult quandaries of their existence.

This has given a period of freedom to the refugees who are starting very public and near disruptive protest rallies in Tel Aviv and Jerusalem.

It shouldn’t seem the least bit counter-intuitive that the world’s growing backlash against refugees is played out most succinctly in Israel. Israel is, in a very real sense, a nation of refugees.

So if Israel turns away from its own fundamental principles, the African refugee in particular is pretty much doomed.