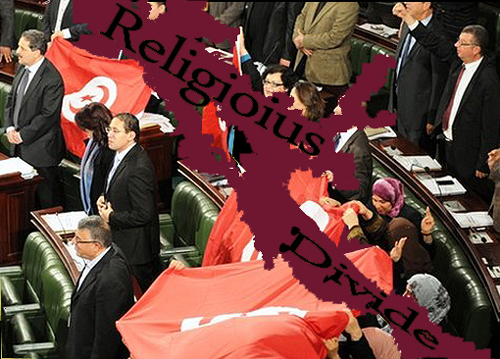 Is last night’s passage of a new constitution in Tunisia a real positive turning point in the struggle for African democracy? Many believe so, but Islamic fundamentalism still has a hook in the document.

As democracy warrants it should. Like Egypt, majority rule government placed very fundamental Islamists in control of Tunisia’s legislature. Like Egypt, the government moved further and further towards Islamic extremism.

As democracy warranted. As the majority of Tunisians wanted.

The Tunisian document enshrines Islam as the “state religion” but also guarantees many freedoms that conservative Muslim regimes would ban, like parity for women throughout society.

But the constitution forbids “attacks on the sacred” which gives wide latitude to religious leaders to legislate doctrine, despite constitutional human rights. The dilemma is that neither is preeminent.

A very popular national journalist and cartoonist remains in jail for a political cartoon criticizing the Islamists. Although promised early freedom and an executive pardon, he has been kept in jail until arrangements can be made for his deportation to Sweden.

The conundrum for Tunisian politicians is obvious: He should not be jailed under the new constitution, but were he released unequivocally, there would be riots for condoning “attacks on the sacred.”

Although Tunisian legislators are ecstatic and the world mostly supportive (even Human Rights seems pleasantly positive) I see this as the fundamental flaw that will ultimately crack the nation, again.

Tunisia is one of the smaller, one of the most highly educated, and one of the most developed countries in Africa. There is a real similarity to Lebanon, which has also balanced extreme religious positions and human rights over nearly the last century.

But like Lebanon grand periods of peace and prosperity have been continuously interrupted by terrible civil wars and mass disturbances. I think that’s what will now happen in Tunisia.

The problem is that democracy won’t work when opposing beliefs mutually exclude one another. You can’t have a “state religion” and a state without a governing religion, yet that is precisely what Tunisia and other liberals in the Arab world are trying to do.

Ultimately it emanates form our own democracy.

I believe most of our founders were atheists, far ahead of their times. But religion in America in the late 1700s was so diluted by successive immigrants from widely different religious sects, so attacked for being allied with the British king, and so criticized by the secularists in Frances supporting our revolution, that our constitution’s reference to the divine is incredibly scant.

Almost a courtesy rather than a belief.

But as weak a contradiction as it may be, it is not a dialectic. It remains a contradiction and one that now plagues our own society, again, and most certainly terrorizes emerging societies like Tunisia.