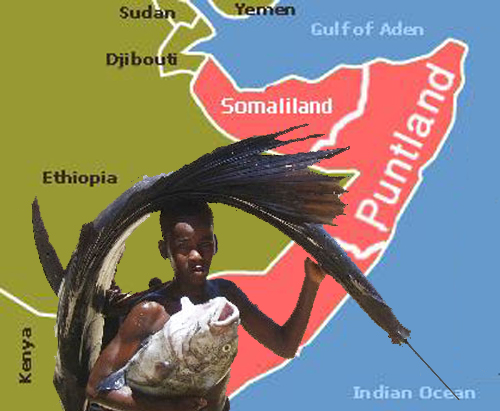 I don’t like it but it’s good news. Should a private foundation in Somalia be doing what really should be the responsibility of the U.S. government?

Developing Somalia’s fishing industry is critical to sustaining peace in the region. Piracy was expertly developed as al-Shabaab’s principal source of revenue by enlisting former fishermen who had been systematically raped of their livelihoods mostly by western fishing companies.

Fishing had been Somalia’s main industry prior to the state failing in the 1990s. Numerous studies documented major western fishing companies, the majority from Italy and France, taking advantage of Somalia’s implosion to rape the seas of the Gulf of Aden.

With all the money and effort western powers have spent trying to oust the terrorists from Somalia, I can’t understand why they won’t rebuild its fishing infrastructure. Somehow, I guess, it’s just not militaristic enough.

So the job is being left to the private sector, which could be all well and good of course, but I fear without government to government involvement, here, a free-for-all is going to develop in these nutrient rich waters.

For several years now as the Somali war wound down, there have been reports of private companies violating fishing treaties and dumping toxic waste, in essence taking advantage of the lack of government (including multiple government, regional and UN) regulations.

The Oceans Beyond Piracy project brought together active western partners in Somalia at a Thursday conference in London which was striking for its positive outlook.

Led by a Danish NGO, Somali Fair Fishing, the conference wants to rebuild not only the infrastructure but the human capital of the Berbera port.

Berbera is Somaliland’s main port on the Gulf of Aden just before the Red Sea. Somaliland and Puntland are autonomous regions of Somalia that have been relatively peaceful for more than a decade.

Functioning as independent states, the two northern regions have seen realistic development over the last decade but been given little outside attention. World aid organizations, for example, are reluctant to promote what would become the fracturing of a former Somalia Republic.

New elections in Somaliland and new policy initiatives in Puntland announced this week, however, suggest that the two autonomous regions of Somaliland and Puntland are newly interested in reintegration.

It makes imminent sense for western powers and world aid organizations to go in full force to develop Somaliland’s Berbera. It’s wonderful what Oceans Beyond Piracy and other small NGOs are trying to do, but it’s just not enough.

There’s no point in developing a fishing industry if there’s no fish. Without reenforcement of existing world treaties about the Somali fishing harvests, and without worldwide enforcement to stop ships treating the Gulf of Aden as the world’s biggest public toilet, there won’t be any fish.

The foundation supporting the Oceans Beyond Piracy initiative is the One Earth Foundation of Colorado. The CEO, Marcel Arsenault, made his fortune anticipating the housing bust of 2008. As a new kid on the block of a growing number of private philanthropy organizations it doesn’t have a long enough track record for any critical appraisal.

But its mission looks good and I wish them success.

As always, though, I worry when private interests trump the responsibility of government institutions.

The Thursday conference attracted a number of giant players, like BP and Maersk. But these mega multinationals are not going to invest fully until western governments decide to invest as much in cranes and drones.

It’s an unending story of failed peace making. Nixon tried lamely to explain to a fatigued America that Vietnam could only be won by building factories, but it was an out of sync suggestion at the time it was made, way too late.

War is expensive. Fishing is much less expensive and far more productive.

Before we lose Somalia again, world powers should see what groups like One Earth and Fair Fishing are trying to do, and learn from them. USAid in Somalia should now be given as much support as AFRICOM.