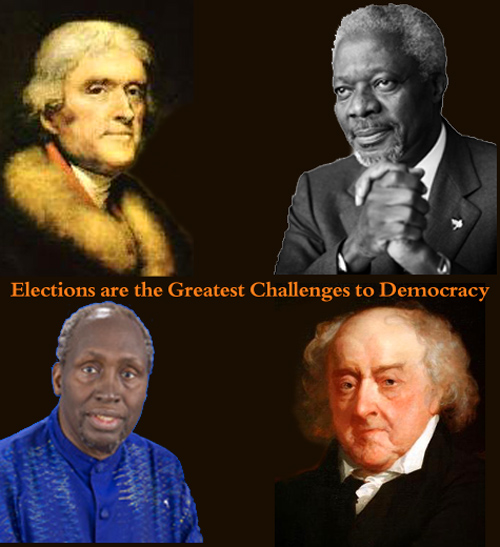 Two of Africa’s wisest old men have echoed the same cautions that America’s founders gave a young democracy about its elections. Beware: Bad elections are the greatest threats to democracy.

Yesterday Kofi Annan and Ngugi wa’Thiongo focused on the upcoming Kenyan elections as a marker for world democracy and reflected on America’s distortion of elections as something to be avoided by younger countries.

Annan is a well-known world figure, one of the most prominent Secretary Generals the United Nations has ever had. Like Jimmy Carter who remained remarkably active after leaving office, Annan’s role in global negotiations has never ceased. In fact, it was Annan who led the Kenyans out of the mire of the violence following their last election in 2007.

Ngugi has adopted America as his home after a career as a professor at Yale and New York universities. He is currently the Distinguished Professor of English and Comparative Literature at the Univ. of California in Irvine. Until 2004 he lived intermittently between Kenya and the U.S., and in Kenya is heralded as a famous revolutionary and writer.

What Americans obsessed with their own election need to know is that huge new parts of the world, especially in Africa, are adopting democracy and America’s form of democracy to govern their young societies.

This is a major change from hardly a generation ago when just as many new countries were adopting forms of Chinese communism or heavily top-down managed socialism. It’s a testament of course to the end of the Cold War, but also of the preeminence of capitalism in the global economy.

Old countries like China might be able to fiddle with capitalism and not disrupt their mechanisms for governing, but new countries can’t. The power of the economy is so critical with emerging countries that it often trumps other moral and social issues.

A case in point was Ngugi’s violent condemnation yesterday of Kenya’s decision to use English as the predominant language for governance. Ngugi is Kikuyu, the main tribe in Kenya and was imprisoned as a freedom fighter under the British. He is himself a master of the English language but he has written scholarly novels in Kikuyu, and he believes preserving multiple languages is critical to an advanced society.

It is something of the inverse argument in America as to whether Latinos should be validated by a greater use of Spanish in government.

“The post-colonial government and the entire [Kenyan] elite have chosen enslavement over empowerment,” he concludes.

The problem, of course, is that the violence that followed the 2007 elections turned ethnic. It is completely understandable that current politicians wishing to avoid anything much beyond a dull election want to steer clear of languages that are specifically ethnic.

In America as in Kenya when one person speaks a language that another person doesn’t understand, enormous suspicions arise, conjecture becomes almost as credible as fact-checking, and literally all hell can break lose. Unlike in Canada or Belgium where multilingual democracy flourishes, in most of the world multiple languages breed distrust.

(N.B. What puzzles many in the Kenyan situation, though, is why English was chosen rather than Swahili. Swahili belongs to no specific tribe and so is clearly universal among East Africans. The problem is that Swahili is a lingua franca and suffers thereby from a sore lack of precision. Tanzania tried to use Swahili as the formal language for many years, slowly giving way to English. It’s near impossible in Swahili to say succinctly, “Federal zoning regulations with regards to clean and safe landfills will preempt county council laws with regards to individual ownership.”)

(N.B. continued: Swahili in my view, by the way, is one of man’s most wondrous cultural achievements of the last several centuries, creating poetry of nearly every statement while maintaining a universal morality far superior to many popular western notions about right and wrong. But that’s another blog, and in this case I think Ngugi is wrong.)

Annan didn’t mention language, but in virtually everything else the two scholars said yesterday there was agreement.

Annan who is Ghanian was in Kenya yesterday. He referred to his fears that money is buying power in Kenya, as in the world over. “The infusion of money in politics … threatens to hollow out democracy,” Annan told CNN in September.

Annan understands the importance of capitalism in the world, today, but he also sees it as a threat to democracy. Many of us wait expectantly for his treatise on how the twain should ever meet, but for the time being I suppose we should presume he simply wants aggressive regulation.

In Kenya today he sees a brazen challenge to its young democracy by its rich leaders. Four of Kenya’s richest men and political leaders, including the son of the first president Jomo Kenyatta, are on trial in The Hague for inciting the violence of 2007.

Yet two of them, Uhuru Kenyatta and William Ruto, are running for president. (Not yet officially, but in Kenya “officially” comes quite close to the actual election.)

Annan sees this occurring not because the Kenyan people want it to, but because these individuals are so powerful, and because they are so rich.

American politicans’ penchant for personal stories about their early impoverishment is mostly malarkey or at best irrelevant to their current control of wealth. The vast majority of successful American politicians are rich. The cost of entering politics defies many startups. Over $1 billion will be spent by candidates and their surrogates in the current U.S. election.

Both men see the poor, the less privileged, the disabled and geographically disenfranchised as likely a majority of African voters that can be deftly ignored in a modern election:

Ngugi: “Too often, women, young people, minorities and other marginalized groups are not given a full opportunity to exercise their democratic rights.”

Democracy is today widely popular throughout new African countries and embraced as the best way to protect and govern themselves. But the messages that Ngugi and Annan delivered yesterday to a promising young African country resonant here at home just as much.

Democracy is never achieved; it’s simply strived for. America has used democracy for nearly two and a half centuries, yet the corrupting power of money, the difficulties of implementing democracy to a multi-lingual population, and the ease with which the underprivileged can be disenfranchised are threats as great today as they were in the 18th century.

Nor any greater a threat in Kenya than here.