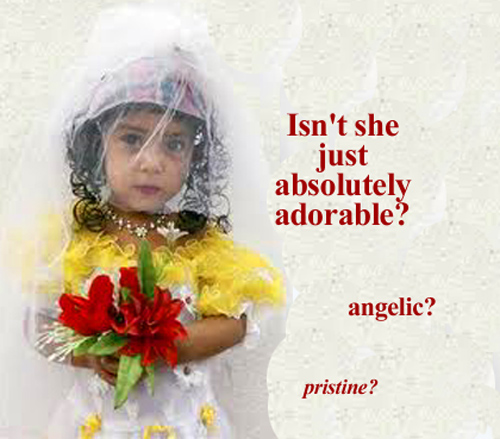 We should be incensed by the privileged often American tourist to rural Africa who characterizes want and poverty as some kind of pristine Garden of Eden that should just be left alone.

After her “first visit to Kenya,” a recent American tourist asked in her blog: “The Maasai culture and traditions are pure, so why would you want to change them?”

The question makes me scream: because the Maasai want iPhones, and sleeper posturepedic mattresses, and Brita filters, and slim notebooks and a hope for a better life. Anything wrong with that?

Today, the UN and hundreds of other organizations worldwide, celebrate the Day of the Girl Child which specifically condemns child marriages and which pointedly teases out much of American conservative ambiguities about freedom and individual rights.

Most forced wedlock for girl children occurs in Asia, but a close second is sub-Saharan Africa and specifically in East Africa’s still deeply rural areas.

“Some people sell their daughters at a tender age so they can get food. It’s common but people are silent about it,” a rural Kenyan told Reuters TrustLaw.

Now to some that may seem all so noble, right?

Such practices as female circumcision, child marriage and prostitution, and even child slavery are time and again reported in equivocal ways.

“Here’s a troubling fact: 60 million girls world wide are forced into marriage before the age of 18…,” that American tourist wrote in her blog, “But when it comes to cultures that practice child marriages, not everyone agrees that change is a good thing.”

Exactly who is everyone? A few locals you photographed on your $10,000 safari while being completely incapable of speaking to them them in their own language? Might their smiles had something to do with the 200 shillings you gave them for the shot?

I concede there are issues specifically relating to children that teeter on that sharp fence separating individual from human rights and perhaps this contributes to why some Americans believe that poverty and deprivation is fated to “just be left alone.”

Few argue that each child is different, capable of assuming independence at earlier or later ages. The UN and many organizations, though, set 18 years as the first age societies should presume a child is fully able to assume whole responsibility for herself.

Only a few generations ago, that was absurd. My grandmother married at 13 years old, a lost immigrant from Croatia. If she had not married she would likely have died in the mayhem that followed the flow of thousands of immigrants out of Ellis Island.

But that’s the point. That was more than 100 years ago. Although communities in Bangladesh or Mogadishu may not seem much different today than Ellis Island was at the turn of the 20th century, the global awareness of poverty and deprivation has increased enormously.

Fortunately, we all now care more about one another than ever before, if for no other reason than we’ve the tools to see further and deeper, everywhere.

The resilient human spirit, which burns greater in my opinion among the poor and deprived, will find moments in even the most awful situations for satisfaction and happiness. The beautiful nostalgia of my own boyhood may indeed not be so different from that of a successful African businesswoman of her own childhood in a rural hut.

But the effrontery of we privileged to wonder if earlier she might have chosen to remain deprived and under privileged is astounding. I believe it’s evil. It’s racist and the result of greed, a fear that to make things better for others means they will be made worse for ourselves.

Redistribution. Shudder at that word.

And the point there is that redistribution is only the beginning. With more of the world raised from deprivation, the productive capacity will be so remarkably increased that there will be more for all.

So get a grip. Redistribute some of that wealth that got you to Kenya to the poor little Maasai girl who would very much like to visit you in Columbus.