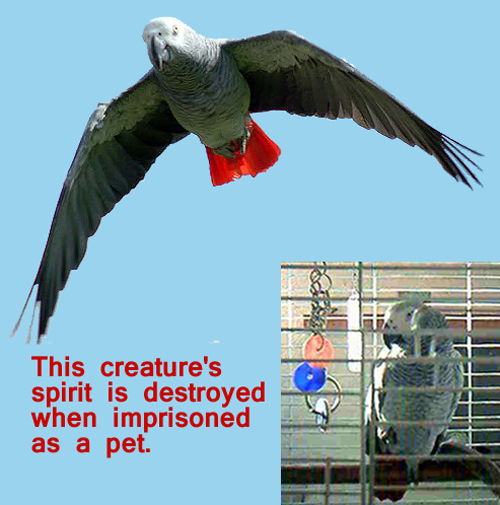 I am a loving pet owner. But I would never imprison a wild animal and then call it a pet. African Grey Parrots belong in the wild, not in a cage.

The majority of African Greys kept in the United States may have actually been born in captivity. In a sense they were manufactured to be pets; they’ve never soared over Africa’s great forests.

But be that as it may, are you sure that your bird was captive bred? And even if it truly was, do you realize that your keeping the bird in a cage is contributing to its extinction in the wild, where it much more truly belongs?

There are many as 30,000 loving owners of the Grey Parrot (Psittacus erithacus) in the United States, which for the first time this year was listed as “vulnerable” by the scientific organization (IUCN) used to determine which animals are in danger of extinction.

If the decline in the African Grey Parrot continues, and if the IUCN ultimately classifies it as “endangered” and if the CITES convention then adopts its recommendation, international trade in the bird would stop.

But the politics involved in this would be extraordinary. So there is real concern that at the point the bird is classified as threatened, it will be too late.

The IUCN explains the rapid decline in Africa’s most famous parrot because “It is one of the most popular avian pets in Europe, the United States, and the Middle East due to its longevity and unparalleled ability to mimic human speech.”

IUCN says that over the last 30 years “a million birds” may have been removed from the wild in Africa. Most of these are removed illegally, although a good portion have been captured on licenses given by corrupt African governments.

The market in the U.S. has existed for decades, but a new and vibrant market in China has also emerged as a result of China’s increased wealth. And unlike the U.S. and Europe, there are no laws in China that restrict the importation of wild birds.

Today, an African Grey Parrot in the U.S. sells for an average of $1,000. Good statistics are not available, but successful breeding of captive African Greys is a very lucrative business. Reputable companies like PetSmart routinely sell them, and eBay and Amazon both offer them.

But since there is no exact certification of what is truly a captive-bred bird, it’s likely today that many are illegal imports.

Many of these birds are smuggled out of Africa through poorly monitored ports like Windhoek, Namibia. Last week the Namibian Avicultural Association adopted new rules to try to stem the flow of illegal birds through the country.

The association claims that bird dealers in the country “do not seem to know that buying a parrot without [proper certification] may represent a bird that has been illegally caught in the wild.”

Like outright poaching, I can sympathize with Africans desperate to make a day’s wage, and capturing birds isn’t as difficult as it seems. On the Windhoek black market as throughout Africa, National Geographic estimates the poacher receives about $30 a bird.

The birds that survive the smuggling are taken by wholesalers in the U.S., Europe and China that launder their origin and sell them to companies like PetSmart. The wholesaler probably makes $300-500 per bird.

So while I can empathize with the poacher, it’s not possible to condone the knowingly illegal work of the middleman.

Ultimately, this horrendous trade will stop only when the market stops. Without a listing by CITES as endangered that’s impossible in places like China.

But at here at home and in Europe, let common sense prevail. Get a dog.