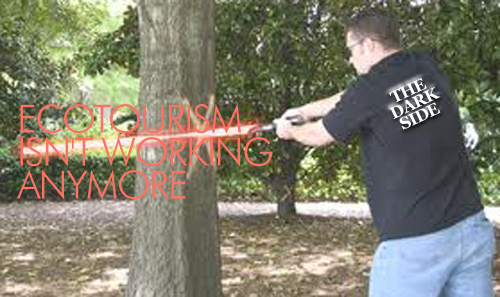 As indigenous people benefit from development, the majority of ecotourism projects are revealed as shams. This is because the local people get smart enough to call a spade, a spade.

I regret I can’t show you verbatim many of the emails I received — offsite — about yesterday’s blog. And I won’t violate confidences other than to say much of the world agrees with me, and by the way, that’s not really news.

But while yesterday was mostly just an appraisal of what today’s ruthless market is doing to ecotourism, there was this incessant desire by many of you to figure out a good way to resuscitate “ecotourism.” Shouldn’t we be doing everything possible to keep it alive? Hasn’t it been good? Even if the market doesn’t like it, isn’t it worth nurturing somehow?

No. While the concept of ecotourism might be lofty, it always had a darker side.

One of the greatest banner failures of the United Nations was its 2002 Year of Ecotourism. As part of that event, the UN funded the first ever world ecotourism conference in May in Quebec City. There were 500 delegates from 84 countries.

It was a contentious and raucous convention. One of the observers at the conference, a group representing the interests of the Akha Peoples of Asia, spoke for the vast majority of indigenous delegates. AKHA reported that “Ecotourism had just opened the doors to more destruction of natural resources and ecosystems; community life in affected areas was seriously disrupted; and in some cases, Indigenous Peoples were forced out of their traditional lands.”

The conference was not what the promoters had hoped it would be. There was not a sunny picture of protagonists standing before a tree that was saved by KUONI. Instead, there was incredible rancor as the more developed of the developing peoples of the world stepped to the podium one by one to denounce “Ecotourism.”

The final report was damning.

Although gauged in diplomatic language, the outcry from the developed world was too much to ignore. The report slammed African governments in particular for failing to adequately educate and otherwise make aware the exploitation of foreign tourism companies.

“Particular mention was made of commoditisation in tourism in [Africa],” the report boldly exclaimed in opening chapters. Ecotourism had promoted the “degradation of the intrinsic value of cultural items, beliefs, goods, and practices…”

“This trivialisation of culture is demonstrated by the sale of culturally related trinkets,” the report goes on, without the benefit of the creator of the trinket getting a fair price, much less for the payment of a lodge night to stay in the wilderness.

Report after report outlined situations where local people were simply not getting their fair share: That they were “being used” for profitable enterprises whose profits were not being fairly shared with them.

This is the crux of the issue, even today. Why should any of the profits of an ecotourism lodge in Africa end up in the United States? Are there any Africans who are adding to their bank accounts by the proceeds from Canyon Ranch in Arizona?

That conference ended as quickly as the promoters could do so. Not much has followed, although a very important change was manifest. UN agencies by 2003 dropped their former use of the term, “Ecotourism” and replaced it with today’s popular, “Sustainable Tourism.”

This was a crucial admission that ecology was not as important as sustainability. And frankly, I must agree with the important caveat that the two may be miserably intertwined.

To me the final blow to any hope of making ecotourism a viable concept came at the World Parks Congress (WPC), in Durban, South Africa, in September 2003. Conservation International and UNEP introduced their jointly produced study, “Tourism and Biodiversity: Mapping Tourism’s Global Footprint” which essentially concluded that tourism, and ecotourism in all its form in particular, was an “extreme threat” to biodiversity.

We came full circle in just a few years. Unregulated capitalism provided by the developed world to preserve the developing world’s wilderness, jelly coated as “ecotourism,” was now the very thing that threatened that wilderness.

And almost exclusively so because the profits are not fairly shared. And as the peoples receiving those unfairly small profits used them to educate themselves, to research their situation, they began to realize that while their wilderness might not be being exploited, they were.

Remedies have begun by a lot of good companies. Many “ecofriendly” projects have started to share profits better. But this has made them more and more expensive and less and less attractive to the market.

The market, like capitalism, is cruel. And this is yesterday’s blog. The great ax in ecotourism: it won’t sell.