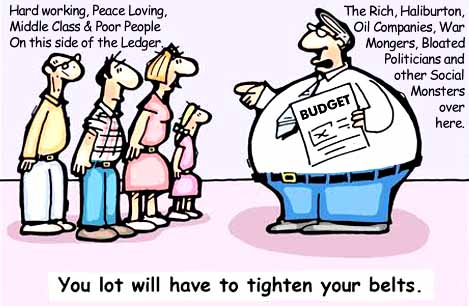 America’s belt tightening vied with the Masters this weekend as the best reality TV show in the world. But now that the entertainment is over, does anyone have the slightest idea what catastrophic nonsense has just occurred?! One tiny example from Africa.

4,5,6,7, ad infinitum: We claim this is a budget battle.
As my investors have screamed at me for a half century: Raise Revenue!

So now to the promised example in Africa, supplied by a young African wizard, Conor Godfrey, who will be taking over this blog as of tomorrow as I head back on safari.

America’s belt tightening has been going on for a while, and now The U.S. Commercial Service is pulling out of Ghana. This branch of the U.S. government has essentially made money for the U.S. government since its inception, finding really attractive capitalist projects around the world that U.S. companies can exploit.

“The National Export Initiative trumpeted by president Obama was supposed to help U.S. companies operate in places just like Ghana!

“We’re even closing down the Commercial Service office in Senegal, our only post in Francophone W. Africa (this is a well sourced rumor).”

Emerging African markets are one of the most rapidly growing consumer niches in the world. They need to buy a lot of stuff from us: agricultural machinery, pharmaceuticals, internet and communication technologies.

Sources inside the USG also told Conor that the Commerce Dept. will not open an office in Angola as had been planned. Cross another one of the fastest growing countries in the world off the list.

This is very shortsighted. The little bit of money this might save is guaranteed to reduce U.S. commercial sales in the short-term, as competitive companies especially from Europe and Asia beat America to the punch.

“I am not some neo-colonial war monger,” Conor explains. “I don’t think the U.S. needs to be commercially colonizing Africa before the scary Chinese get there. I just think that many (not all) African countries are at a point in their development curve where they can participate meaningfully in international commerce, without being relegated to mere consumers of manufactured goods and exporters of raw materials. I want the U.S. to be a real partner for this new Africa—both the continent and the U.S. will reap substantial benefits.”

“This entire episode must be embarrassing for a president that landed in Accra with such fanfare near the beginning of his presidency, claiming to want a new relationship with Africa. Read the full speech here. I would like to think that I am not just one of the many special interest groups that believes their little corner of the budget is the one that really matters. In this case, I swear the numbers speak for themselves.

“Read this essay by the President of the Corporate Council on Africa on the shortsightedness of the government’s cuts.

I know who missed it.