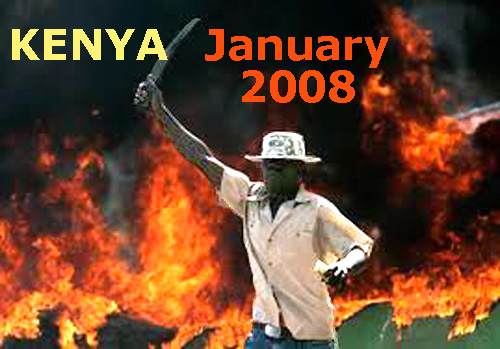 A very tense calm reigns over Kenya, today, following The Hague’s naming of the six most responsible for the violence in 2008.

The vast, vast majority of Kenyans today, rich and poor, want this chapter turned over. I don’t predict any wide scale violence, but the streets of Nairobi, today, are extremely tense.

Phones, email and internet and even satellite connections were flooded from the outside world, and much of East Africa was in a communications logjam by the end of its day.

Five prominent politicians and one media personality were charged by the same global authority that tried Slobodan Miloševic’ and the Rwandan instigators of genocide as the principals who caused Kenya’s 2008 violence.

The six represent several different tribes whose alleged unsavory alliance doesn’t seem to make a lot of sense at first. It includes a very powerful Rift Valley politician and former important minister, William Ruto – a Kalenjin – and from a rival tribe, the Kikuyu, Uhuru Kenyatta, the son of the “Father of the Country.”

But that was the point of The Hague’s investigations, not to name everyone who was violent, but to single out those who actively prepared then stoked it.

There had been rumors that Uhuru Kenyatta, son of the first president Jomo Kenyatta, was implicated, but many had considered him too westernized to have become so mired in the darker side of Kenyan politics. Kenyatta spent a good portion of his younger life outside the country being educated and was widely considered at one point a modern future leader.

In fact both Ruto and Kenyatta had announced interest in running for president.

Three of the six are currently serving ministers in the coalition government, and Muthaura is something akin to the President’s Chief of Staff. President Mwai Kibaki was quick to follow the announcement by insisting they not yet resign public duties. Kibaki also suggested the government might now reopen the question of whether to hold the trials in Kenya, effectively emasculating the power of The Hague.

The Hague issued what amounts to two indictments. The first – against Ruto, Kenyatta, Ali and Kosgey – is for “alleged murder, deportation and persecutions.” The Hague considers the four to have prepared in advance for the violence, knowing full well that the results of the 2008 election would be contentious.

In a horrible additional twist, Kenyatta is alleged to have orchestrated his violence through the underworld using Kenya’s mafia, the Mungiki.

The less severe (if such a comparison is possible) indictment against Sang and Muthaura is for pouring fuel on the fire once the violence began.

It’s widely known that many more people were involved. The number of people actually killed was somewhere between 1300 and 1500, and those displaced as high as 350,000. It took Kofi Annan and the full press power of the U.S. and the U.K. to stop the January, 2008, violence. This resulted in a now wonderfully working coalition government that just successfully passed through national referendum an excellent new constitution.

The net result of this announcement is to weaken substantially the political side led by Kikuyu President Mwai Kibaki and improve the standing of Luo Prime Minister Raila Odinga. One complication in this simplification is that the Kalenjin, and Ruto in particular, are close allies of Odinga.

Reduced even further, the Hague’s charges if presumed correct corroborate the widely held analysis that Odinga’s election to president in 2007 was stolen by the fortress of Kikuyu power.

But the violence that began was absolutely not ethnic, although that’s how it quickly morphed. But it began because Odinga was a champion of the poor, a true socialist; while Kibaki was the godfather of the establishment, a capitalist to the core.

The violence began in the slums where the poorest in the country had worked so hard to elect Odinga. The ethnic division in Nairobi’s slums is much less clear.