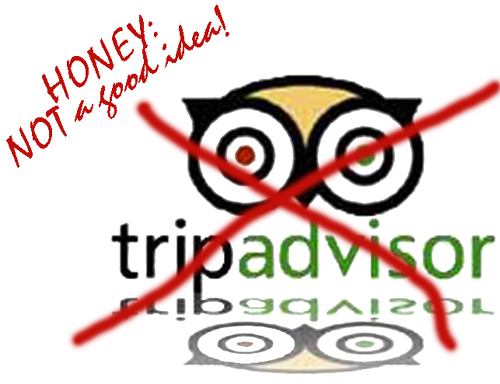 What do I have in common with Arthur Frommer and Google? We don’t think you should use TripAdvisor!

You shouldn’t believe everything you read. Verification and consistent fact-checking is the mantra of good investigative analysis and journalism. Experts take time to become experts. Monday Morning Quarterbacks are good for nothing but Budweiser.

And you shouldn’t believe a traveler you don’t know about the quality of his recent experience.

That’s been my gripe: the wholly and exclusively subjective analysis of TripAdvisor reviews bereft of any expertise whatever.

And Google, now, seems to agree.

Yes! (Not that I’m a great fan of Google or anything that gets this big, but when the bigwigs start to fight among one another, I’ll route for those carrying my view to be sure.)

Time and again I’ve listened to astute clients claim that they are fully capable of reading between the lines, judging which reviews seem more credible.

It’s possible, if you’ve had a similar experience to what the review is about, but still unlikely. At the very least, you need to know the reviewer, as you would know and trust your friends about a travel experience. The known idiosyncracies and prejudices of your friend you’ll understand temper his/her evaluation, and you’ll probably then be in a better position to use the review.

Arthur Frommer has carried on his own campaign against TripAdvisor for as long as I have, and in last month’s blog critical of TripAdvisor he reiterated, “I will not choose the London or Paris hotel recommendation of an amateur who has stayed in exactly one London and one Paris hotel in the course of their entire life.”

The UK based KwikChex, a vetting agency for travel companies, announced in September that it was representing more than 120 travel companies (mostly hotels) in a possible class action suit against TripAdvisor.

This gets much more onerous than just my or Frommer’s general cautions about using TripAdvisor. These 120 travel concerns, one of which I know personally, have been defamed by malicious reviews on TripAdvisor using outright lies.

Kwikchex can be hired to sort things out. With enough documentation, TripAdvisor can be convinced to remove a review and has done so, specifically at Kwikchex’s behest. But the time and expense can sometimes be deadly for a small travel company or hotel.

The ego of many who believe they have “discovered” something is hard to suppress. The reason you don’t buy that tonic to grow hair is because … well, it doesn’t grow hair! Despite the old hairy man on the television who says it does!

As a travel consumer, you need to evince that same kind of discipline. Some of you may, indeed, think you can ferret out the more likely true from the less likely true in a string of TripAdvisor reviews.

I don’t think so.