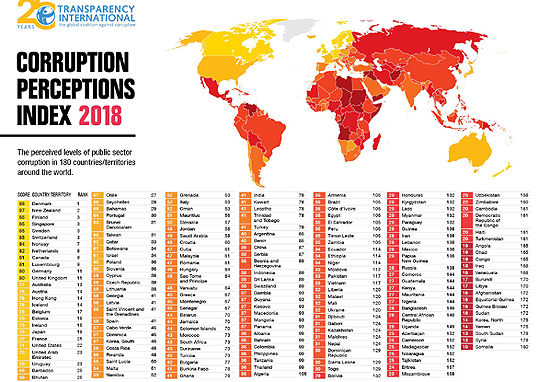 Africans ought not worry as much as they do about yesterday’s annual publication by Transparency Intentional listing the world’s countries by their level of corruption.

I’m sorry I had to wait for our unexpected political nightmare to come to this realization: but TI’s report is as corrupt as any of the countries it evaluates. The report is an annual self-congratulations among white Europeans.

The source data for the report ought to be quickly and easily explained right up front, and that’s not the case. There’s oblique reference to “sources” throughout the analysis and while I suppose it’s possible every source is eventually named, that’s not immediately clear.

The “methodology” download file renders a pdf with an empty data link to “13 sources.” That’s not just embarrassing, it’s offensive, and I wonder if it’s intentional.

It just doesn’t square that America and Austria or even the Netherlands retain their high positions year after year given the politics that we all suffer, today.

America has fallen, to be sure enough to warrant a “watch” by TI. But its fall from 16th least corrupt to 22nd is not commensurate with global reality. America, today, is just as corrupt and quantitatively more dangerously so than many African countries.

Year after year at this time I have reported on Transparency International’s “Corruption Perceptions Index” precisely because Africans are so obsessed with it:

Americans who distribute itty bitty parts of their wealth abroad through useless charities or useful but often wasteful aid programs base many of their decisions on this report. And it now strikes me at long last how incredibly hypocritical this is.

The suffering that the current American administration has caused the world – not always intentionally – is tantamount to more than the aggregate suffering of every single dictator in Africa.

That suffering is in large part caused by corruption in America. Does anyone remember the Emoluments Clause debate? That is Numero Uno in America’s corruption. Only the most ruthless dictators in the world dare link their business so closely to their politics.

The suffering thrust on already miserable refugees is mind-boggling. The encouragement of racism and extra-legal means to get what you want is beyond the pale. And America is still at number 22, and Kenya is at 144?

Give me a break.

I’m hardly condoning Kenya. But the only value TI has when comparing the U.S. to Kenya is that it drills out every last possible bit of corruption Kenya has, and ultimately that could be good for Kenya.

It’s good Kenyans worry about this, and it’s inspiring that they want it to change.

Clearly, TI is a club of elite with criterion that weight upwards richer, whiter societies. It’s far beyond first principles of don’t lie. It condones the qualifications of predatory capitalism. It endorses the unjust elections of electoral colleges and 60-vote majorities, just provided that the outcomes of those elections and majorities perpetuate themselves.

It clarifies the status quo as divine.

America is just as corrupt but more dangerously so than Kenya. That is the AAM 2018 Corruption Index and it’s as credentialed as TI.