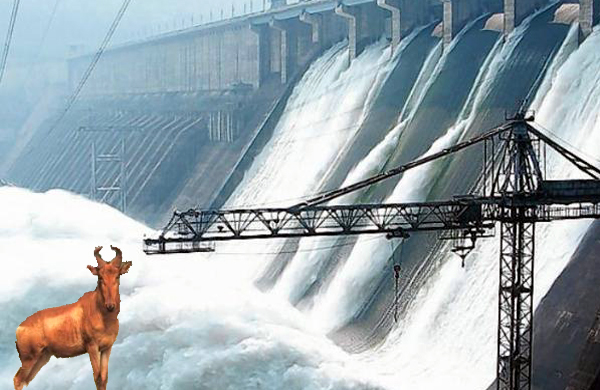 Yesterday the Tanzania government rejected an appeal by the German Parliament to consider alternatives to the giant Stiegler’s Dam project.

In a very unusual Bundestag debate of so narrow an issue a wide coalition of German parties emphasized the growing evidence that the dam will destroy The Selous, one of Africa’s most pristine wildernesses.

Financing for the dam was completed almost a year ago with China, and at the end of October Tanzania began awarding contracts. The original timetable had bulldozers active this year with completion by 2022. Most analysts now, however, believe as was the case with Ethiopia’s similar mega dam project, it will probably be several years before spades turn the ground and as much as a decade before electricity is finally produced.

Preparation for construction, though, takes many forms and is itself ecologically damaging. The government has identified 355,000 acres of lowland jungle near the actual dam site for immediate logging.

Very unlike Etosha’s highland desert and semi-desert expanses, The Selous is lowland delta very similar to that found in Louisiana: a mixture of river jungles, lakes, swamps and vast arid flatlands which are the remnants of ages of river silting. Very abundant wildlife, including a large percentage of Africa’s remaining elephant, are concentrated primarily in the smaller areas along its two main rivers, the Rufiji and Ruaha.

After years of so actively opposing the dam that Tanzania almost kicked UNESCO out of the country, the UN agency has now agreed to work with Tanzania to minimize the ecological impact of the project. This is an obvious indication by the same lead organization that successfully stopped the road through the Serengeti that efforts to oppose the dam are now futile.

UNESCO’s passion for The Selous is justified. It’s so vast that much is still not well mapped or biologically surveyed. What is known is that it has no riverine woodland rival in the world for its richness of diversity: more than 2,100 plant types, globally significant populations of elephant, black rhinoceros and wild hunting dog. It may have the world’s largest populations of hippo and buffalo. It’s one of the last refuges for very sensitive, rare ungulates like sable, Lichtenstein’s hartebeest, and Nyassa wildebeest. There are massive numbers of crocs (approaching 100,000) and 350 species of birds, including many endemics and many equally rare.

Tanzania needs electricity. Even casual visitors will likely suffer a power outage. Hydroelectric power is the cleanest, helping the country to also conform to its Paris climate goals. The Bundestag suggested that it would cough up additional aid to help Tanzania develop its sizable natural gas reserves in the south, but I think the suggestion came far too late.

The tourist areas are located almost exclusively along a 20-mile stretch of the Rufiji at the eastern edge of the national park. This stretch includes, in fact, Stiegler’s Gorge where the main dam will be built. Understandably many companies are now withdrawing from the area, but I intend to guide a final safari there in about a year and to drive through some of The Selous’ more remote areas, which will not be immune to the effects of such a large project.