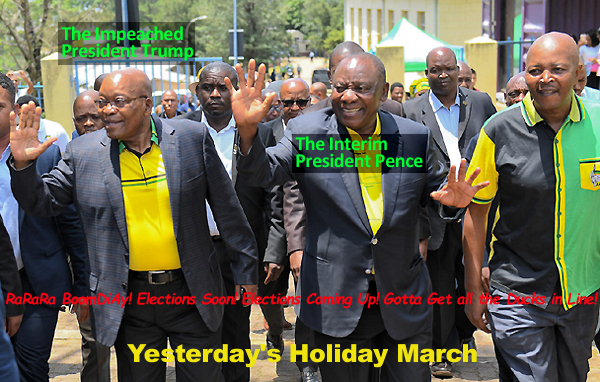 Do you wonder – as I do all the time – what happens after Trump? Wonder no longer. What’s happening right this instant in South Africa tells us, and it’s exactly what you’d expect when your mind finally overcomes your emotions: Trump won’t just disappear.

Jacob Zuma was South Africa’s Trump for nine years until his “high crimes and misdemeanors” grew so massive that to the surprise of most he resigned before he could be thrown out. Nixon exactly.

That was February last year. Since then he’s spent much of his time in court. Many of his children are on their way to jail. His closest supporters are facing life imprisonment. His wider circle of political cronies are fleeing the country or hiding in the bush.

Yesterday he appeared all smiles waving as he marched along side the current president, who had been his arch rival. Explanation? His party will collapse without him and since he was “impeached” his party remains in power and his “arch rival” is obviously from his party.

Funny thing about impeachment. “There is, after all, an election around the corner,” explains South Africa’s most progressive publication.

Now there are important differences with the U.S., of course. Zuma and the current president’s, Cyril Ramaphosa’s party, the ANC, dominates South African politics much more than either of America’s main political parties. It’s the political child of the revolutionary movement led by Nelson Mandela that successfully ended apartheid.

South Africa’s political opposition parties just can’t get big enough to challenge the ANC. That won’t be the case in the U.S. so I don’t think that we’ll see a smiling Donald J. Trump marching beside the interim President Mike Pence at a Memorial Day march.

But there are actually more similarities with South Africa. Trump’s support like Zuma’s is a forged-in-steel third of the electorate. The Second Coming can’t melt their support. That’s a huge minority, a minority which will figure prominently even in any election that the Chief Oomie isn’t a candidate. Even if he’s in jail.

Using Twitter just like Trump, Zuma yesterday aggressively defended his nine scandalous years. That provoked anti-Tweets and op-Tweets and re-Tweets and soon all of South Africa was debating the “Zuma legacy.”

His allies immediately picked up the torch to douse it: “My request to the leadership of the ANC: Let’s pause a bit, move away from this debate. It’s not helpful for South Africa and the ANC,” one of Zuma’s staunchest allies said yesterday.

I can imagine Mitch McConnell or Joanie Ernst or even Peter King or even even John Kasich saying as much. Like the apologizer in South Africa, they will all be shackled to the party that Trump (Zuma) started to destroy but know that condoning his legacy is toxic.

So what will they do?

“We have forgiven Zuma,” says Joseph Malema, a rough equivalent of Bernie Sanders here. The communist even made the statement in a church! So even Trump (Zuma) opponents are nakedly vying for his support.

The horrible ramification of all of this is that while Zuma (Trump), their families and friends may all end up in jail, his supporters are suddenly the king makers.

Zuma, like Trump, is not a very intelligent thing, certainly not a “leader.” They are followers – manifestations of deep discontent, discontent that’s so overwhelming not facts or truth or Polar Vortex’s will break them up.

But until that discontent is broken up – until it’s dealt with square on, this steel third of the electorate will remain the decisive and often random determinate of our governments. Funny thing about democratic minorities.